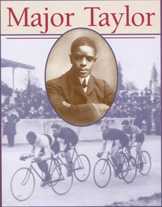 On a library listserv a couple months ago, someone was looking for specific information about a French journalist and sports promoter by the name of Robert Coquelle. “Coquelle,” she wrote, “is known for having brought the African American cyclist, Major Taylor, to Europe to race.” Now I’m intrigued, not only by Coquelle, who interviewed the Wright Brothers early on, but mostly Who is Major Taylor?

Marshall Walter “Major” Taylor was a champion cyclist in a period of American history when cycling was very big. Major, who got the nickname from wearing a uniform in his early teens has a society named for him and has a pretty decent write-up in (shudder) Wikipedia. There’s a guy in Rochester who has put together an extensive timeline including his burial in a pauper’s grave in the early 1930s, despite making some serious money, arranged by Coquelle and others.

But it’s this story that most intrigued me. It suggests that Major Taylor was trying to be white, not as in passing for white – he was too dark for that – but rather hoping for a raceless society, recognizing that his blackness was a hindrance. Here’s a poem from this piece by Taylor:
As white as you are, and black as I be
Still it was nature’s Decree
For black as I be, and white as you are
I can be white though blacker than tar (Taylor 418) Apparently, he had hoped his “inner whiteness” would save him from Jim Crow segregation; it did not.

Whatever his racial ambivalence, he is now considered a African-American hero, and, I believe, rightly so. I encourage you to read more about him at the links I’ve provided, but also here and in Google books.