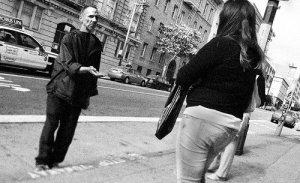 One of those perennially unresolved questions in my life: what should I do when someone, not of my acquaintance, asks me for money, for food or bus fare?

I claim no insight into this except that to walk past someone as though I didn’t hear the question, as though the person were not there, is not an acceptable solution. For me. I make no judgment about what others do, in part because I’m so inconsistent in my own thinking.

I used to give, then I used not to give. I’ve walked into a pizza joint and given money to the proprietor, telling him to get the fellow a couple slices.

One time a friend and I were in Washington Park in Albany and a guy came up to us and asked for some specific amount of money – $2.87 or something like that. He said he was a VietNam vet and that he was going to use the money to buy liquor. And we GAVE it to him. Either it was so honest that we could not resist or a most excellent con.

And that’s what the real issue is, isn’t it? You give money to someone who says he needs food and you’re afraid that he’ll use it on booze and drugs.

While I understand the logistical reason for doing so, I miss the bus tokens that the bus company, the CDTA, used to sell. I used to buy 10 of them for $9.50 and when someone hit me up for bus fare, I’d just give her a token. They put the kibosh on tokens, BTW, because other items – foreign coins, casino slugs, etc. – could replicate the tokens in the machinery.

I figured out that some folks would then sell the token I gave them to someone for cash, and then buy something else.

This has particularly come to mind, not just because it’s the Advent season but because of the Gospel lesson in the liturgy a couple weeks ago, Matthew 25:31-46, which reads in part:
Then the king will say to those on his right, ‘Come, you who are blessed by my Father…For I was hungry and you gave me food, I was thirsty and you gave me drink, a stranger and you welcomed me, naked and you clothed me, ill and you cared for me, in prison and you visited me.’
Then the righteous will answer him and say, ‘Lord, when did we see you hungry and feed you, or thirsty and give you drink? When did we see you a stranger and welcome you, or naked and clothe you? When did we see you ill or in prison, and visit you?’
And the king will say to them in reply, ‘Amen, I say to you, whatever you did for one of these least brothers of mine, you did for me.’
This article also came to mind.

So, to be crude about it, aren’t we directed to help that smelly, crazy-looking guy on the street? The fact that I give to registered charities doesn’t take me off the hook when face to face with a human in need. Does it?

I had this conversation with my sister who was musing on the very same issue. She noted that her own safety and security is an issue. I can understand that, which is why I give change and even a crumpled single dollar bill from my pocket, but am resistant to show my wallet. On the other hand, her pastor suggested that if you give money based on one piece of information and the user does something else, that’s on them, not on you. Or are you suppose to “discern” their motivation?

In the words of the Beatles’ second movie title, “HELP!”