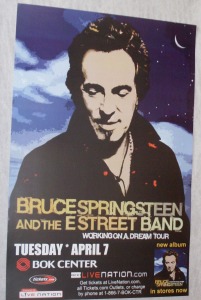 Maybe it was that I was tired from coming back from a conference, then got to see wife and child for only 20 minutes after three days away. Perhaps it was near-vertigo from climbing those Times Union Center steps to the very top row. More likely though, it was the 45-minute wait from the scheduled 7:30 start time to the actual commencement of the performance. But I was not ready to be just swept away by Bruce and the band playing “Badlands” as their first number; it was too obvious to me. Later in the show, maybe, as he did on a Barcelona performance that played on WMHT public television a couple months ago. I later discover that Badlands was the opening song on every performance on this tour so far, save for the first one.

But wait …that drummer is GREAT! Who the heck IS he? He’s a good 30 years younger than Springsteen. With the energy he’s playing, will he be burned out by the end of the second song, Radio Nowhere?

And Bruce finally captured me with that third tune, Outlaw Pete, which my friend the Hoffinator said was “ten times, 25 times better” than the studio recording on the current album. From then on, I was with the program; in other words, by “No Surrender” – where did those great backup singers come from? – I had. On “Out in the Street”, he faced those of us seated behind him and used his now shared standard bit of letting most of the band have a line. In “Working on a Dream” he preached, they doo wopped. “Johnny 99” was a magnificent rocking reimagining of the song from the stark Nebraska album.

Astonishing guitar work by Nils Lofgrin on “The Ghost of Tom Joad” was captured on a guitar cam. During “Raise Your Hand”, it seems that the people on the floor of the TU Center raised their signs, with Bruce musing over which ones to collect; this, I’m told, is a tradition that began during the latter stages of the band’s previous tour. “Thunder Road” and “Mony Mony”, the latter the Tommy James and the Shondells hit, were the first two requests played.

Some people complain when the artist leaves it to the audience to sing parts of the song. In this case, they were singly loudly already even when the E Streeters were as well; it was certainly true on the solidly performed “Promised Land” and the requested “Backstreets”.

“Kingdom of Days” was dedicated to Springsteen’s wife, Patty Scialfa, who is recovering from a horse-ring injury. I thought it was uncharacteristically flat; not so much emotionally but pitch-wise. But he ended strong with “The Rising” and that song generally abbreviated B2R.

The encore started with incredible shared vocals on Stephen Foster’s “Hard Times”, which was preceded by a pitch for the Regional Food Bank of Northeastern New York.

The best drawing from my vantage point that I saw and Bruce picked to sing was “Kitty’s Back”, a live staple for decades; the jazzy tune featured several tasty solos. It’s from The Wild, the Innocent and the E Street Shuffle album, which I only have on vinyl and need to fix that. I was recently listening to a bootl an unauthorized recording of that tune from c. 1976.

The group looked like they were finishing with American Land, but then launched into the obligatory song from Born in the USA album, “Glory Days”, complete with the banter between Bruce and Little Steven reminiscent of the Super Bowl appearance.

Oh, and that drummer? He was 18-year-old Jay Weinberg, son of Max. The elder Weinberg, the usual drummer, is also Conan O’Brien’s bandleader and had to be in California while Springsteen was on tour. Bruce said, “This is the first time in 35 years” that someone other than Max sat at the drums. As you can tell from Michael Eck’s review in the Times Union, he more than kept the seat warm for dad.