Ken Levine had an interesting post about ranting. He ranted about Christmas decorations in September, sports seasons that gpo on too long and the like.

SamuraiFrog links to a young woman ranting about a giveaway of Darwin’s Origin of the Species, and for good cause. (Language NSFW.) SF is also good at ranting, himself.

I suppose I’ve ranted now and then in the comments sections of other people’s blogs. I know that at least on one occasion recently, I got rather incensed that a letter writer suggested that the blogger was being racist, essentially because the blogger saw some of the reaction to Barack Obama as being racist. I felt the need to defend the blogger, though I knew the blogger didn’t need any defending from me. But I was SO incensed that I was compelled to anyway. 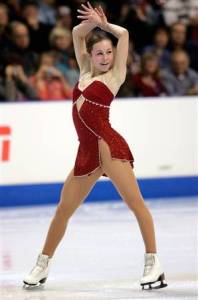 My little rant here, I guess, is small potatoes. My wife is a big fan of figure skating. During the fall and winter, there are six Grand Prix events that take place across the world. Apparently, though, according to this site, the only event that will be televised this season is the Skate America, and for that, only the Ladies Free Skate. No short programs, no men’s, pairs or dance. The U.S. Figure Skating Championships will be shown in January, but in the season leading up to an Olympic year, one wants more opportunities to gauge the skaters from other countries as well as the American contingent.

Meanwhile, NBC IS showing what I frankly consider junk events such as Halloween on Ice Starring Mannheim Steamroller or Musselman’s Brian Boitano Skating Spectacular. These are exhibitions, not real competitive skating. And while I don’t care personally, I think the coverage of he sport does it a disservice. It’d be like showing pre-season games and the All-Star Game without showing the regular season competition. Of course, the fact that the junk events are scheduled so often may be a reflection of the ratings, in which case I suppose the skating viewers may be to blame as well.

Oh, know what else is bugging me? The fact that when i type the words men’s, women’s, or children’s in Blogger and elsewhere, they are underlined in red as though they are misspelled. Sure I can ignore it, but why is it indicated as incorrect in the first place?