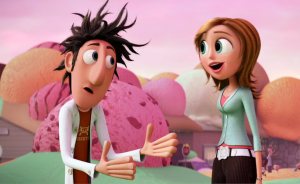 Here’s an interesting experiment; go with your spouse and child to an elementary school gym, along with four dozen other elementary school kids and their parents to see a 2-D version of a 3-D movie based on a 30-page book. That’s what we did a couple Friday nights ago as we viewed Cloudy with a Chance of Meatballs.

I had no preconceived notions about this film. I hadn’t read the book, first published in 1978, written by Judi Barrett and illustrated by Ron Barrett. In fact I never even heard of it until the film was being promoted.

This iteration tells the story of Flint Lockwood, science nerd, whose mother (Lauren Graham) believes he’ll be someone special; she dies early on, and his monosyllabic, unibrow fisherman-father (James Caan) believes in more practical efforts, wanting his son (Bill Hader) to work at the sardine store with him. Everyone on the island of Swallow Falls eats sardines.

Flint is tortured by an annoying character, Baby Brent (Andy Samburg), who was famous as the Gerber baby, and keeps milking his fame. (Independently, my wife and I thought he was very much like the character in the Back to the Future movies who kept harassing Marty McFly’s father.)

Flint, undeterred from his dream, manages to invent a machine that converts water into food. Needing to hide his creativity from the local policeman (Mr. T), he accidentally launches it into the atmosphere. Instead of rain, food of every sort starts falling from the sky. This phenomenon inspires a television station to send a weather reporter trainee (Anna Faris) to cover the phenomenon.

I laughed out loud several times in the first half of the movie at lines that probably went right over the heads of the purported target audience. At least once, I swear I was the ONLY person laughing.

At some point, the movie becomes some illustrated cross between the movies Twister (which I saw) and 2012 (which I did not). This part was less interesting to me, though not without its charms, and frightened the daughter some to boot.

Still, I enjoyed the intelligently-made film overall, and it reviewed well enough. Within the film of writer-directors Phil Lord and Christopher Miller were none-too-subtle digs at the food industry (processed foods with no connection to the source, a la Fast Food Nation), gluttony (see also: the latter part of WALL-E), environmental destruction, and sexism in the entertainment industry.

I finally got around to reading the book this week, and while there were nods to the source material (food as rafts, yellow Jell-O, and of course a spaghetti storm), the movie is a whole ‘nother animal altogether. Friends of friends of mine who are devotees of the book often HATE the movie because it’s not the book; I think the movie should be appreciated on the merits of what’s on the screen, NOT based on how it is or is not true to the source material.
***
The movie trailer.

0 thoughts on “VIDEO REVIEW: Cloudy with a Chance of Meatballs”