Then Freddie Mercury died of AIDS in 1991, coincidentally the same year my friend Vito died of the same disease, and I thought the legacy of the band was over. Well, except for that annoying Vanilla Ice’s Ice Ice Baby in 1990 (#1), which swiped the instrumentation and the tune of the 1981 Queen/David Bowie performance Under Pressure (#29).

But not only did the band continue to play with other vocalists, but many of their original songs lived on.

We Are The Champions has inspired re-releases (1991 Gulf War, 1994 & 1998 World Cup, e.g.) and cover versions by various winning teams in sports around the world, usually performed very badly. The other side of that 1977 #4 single, We Will Rock You has become one of those songs that gets played a great deal at US sporting events. The songs were re-released in 1992, and went to #52.

The performance of Somebody to Love on the soundtrack to the new US TV show Glee has created interest in the original (#13 in 1977) and the George Michael and Queen version (#30 in 1993), recorded for the Freddie Mercury Tribute Concert.

The title of Radio Ga Ga (#16 in 1984) was the inspiration for the name of the current popular phenomenon known as Lady Gaga. 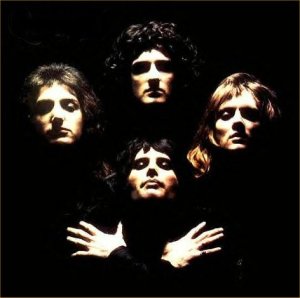 But almost certainly, the most significant song in Queen’s oeuvre is the tiny rock opera Bohemian Rhapsody. Charting in the US in early 1976 (#9), it gained new life when it appeared in the 1992 movie Wayne’s World, when it got all the way to #2. Arguably, the best cover version is by the Muppets. (alternate location).

This is Calvin’s Canadian Cave of Cool’s favorite band, and after reexamining their music, I can better appreciate why.

So what are the rest of the members of Queen doing now?

The brilliant Brian May is also touring with Rodgers and Taylor. When I say brilliant, I don’t just mean his extraordinary guitar licks. In 2008, he completed “his Doctoral Thesis in Astrophysics…successfully submitted the new version of his thesis on Interplanetary Dust.” A story about him recent appeared on the front page of the Wall Street Journal: Queen Guitarist Brian May Digs Badgers Even If the Farmers Loathe Them.

Of course, the story of Freddie Mercury is told. I did enjoy reading a comic book trade story from the past couple years called Freddie & Me, which I discussed briefly. Unfortunately, the direct link to Coverville #496, which features the rare Michael Jackson/Freddie Mercury demo to the Jacksons’ hit “State of Shock” doesn’t work; look for it on iTunes.

QUEEN lives on through its music.

Hey, enter my giveaway contest; details on the sidebar.

0 thoughts on “Q is for Queen”