Bartholemew and the Oobleck. Like most of my favorite Geisel stories, it confronts the powerful.

2. If you could live in any home on a television series, what would it be?

About 40 hours. I pulled an all-nighter to study for my calculus exam in my freshman year in college. I was failing calculus, but ended up with a C for the semester.

“Could It Be Magic”, specifically the Chopin-inspired opening.

Kermit. I mean, he’s green, about which he has sung.

I want to say none. There are things I don’t do anymore, but proud? Not coming to me.

For work, the Census site. For pleasure, probably my old blog, because I haven’t finished updating my links here.

Also, protractors. Always thought they were fun.
You don’t know what a protractor, is, do you? 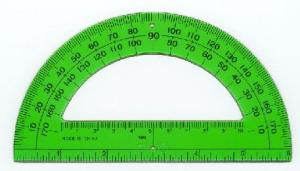 I LOVED TV attorneys! Owen Marshall, the folks on The Bold Ones, the lawyers on the first 13 years of Law & Order. It’s probably Perry Mason, an obvious choice. But I’ll pick D.A. Forrest Bedford, played by Sam Waterston on the 1991-1993 series I’ll Fly Away.

10. What was your most recent trip of more than 50 miles?

11. What’s the best bargain you’ve ever found at a garage sale or junk shop?

I’m not one to go to garage sales or junk shops. I’m not a “bargain” hunter. I’ve bought LPs I like for cheap, in the day, but nothing specific comes to mind.

I was at work, getting ready for a plane trip to Dallas for a conference the next day, when the first plane struck. Lots of confusion about whether it was an accident. Someone got a TV and I saw the first plane in the building, but that was not much to see. There wasn’t any reason to stay, so I went back to work. Then someone told me a SECOND plane hit.

So I watched it for a while, listened to the radio for a while. There were wild reports on the radion of a couple dozen planes that had been hijacked. Went back to see the TV in time to see the first tower collapse, and then pretty much stayed there for a couple hours.

Someone talked with my boss, who was already in Dallas. He seemed to be trying to reassure us that he didn’t think we in Albany were in danger. (One of the planes had been in Albany air space, and we were in a 12-story building.) It wasn’t that we were afraid; it was that we were depressed (and not getting any work done anyway). Eventually, we went home about noon.

I used to go ride my bike up through the Empire State Plaza roadway, take the elevator to the concourse level and ride home. It was technically illegal, but it beat taking State Street hill. Went pased a policeman, who said “Hello,” but then, given the events, started worrying about the guy with a backpack, and called to me, but I feigned not hearing him, and went on as usual. (A month later, after the Afghan war began, they started checking my backpack, so I went another way thereafter.)

Inexplicably, I stopped at a record store on Central Avenue, to pick up Bob Dylan’s Love and Theft CD (with a couple extra songs), which I had preordered, and which was released that day. I was watching the events on the TV there. Went home, watched ABC News for about eight more hours. Have a strong recollection of a film of a plane striking the second building, taken from below, i.e., the street level. Also recall one of the smaller buildings collapsing around 5 p.m.

Some weeks later, our program was involved with a variety of programs trying to facilitate economic recovery, for which our state director won a prestigious award from SBA.

The weeping willow. I think they are cool.

Off the top, the last bio I read was probably the Autobiography of Malcolm X, with Alex Haley.

15. What do you order when you eat Chinese food?

When I was a kid, it was sweet and sour pork. Now, it was some broccoli and beef dish, or maybe General Tso’s.

I don’t know that I have one. I DO hate when a word is misused, such as “ironic” when they mean “coincidental.”

Misssissippi. I like typing it, and it’d turn me into an old blues singer: Mississippi Roger Green; OK, maybe not.

Yogi. When I was five and a half, and in the hospital for a couple days with an explained and uncontrolable bloody nose, watching all of those Hanna-Barbera cartoons (Huckelberry Hound Quick Draw McGraw, Yogi) made what could have been a scary excperience exciting.

20. Describe something that’s happened to you for which you have no explanation.

I was 12, give or take a year. Walking down the street when one of the lenses of my glasses shattered, while I was wearing them. Fortunately, it didn’t hurt my eye. Don’t know if something fell from a tree. I don’t think it was a BB gun. It seemed to have been something that must have fallen from above me, but there was no sign of residue.

21. If you could travel anywhere in Africa, where would it be?

22. What did you have for lunch yesterday?

Work advice, it’s my colleagues or the BUSLIB listserv. Personal advice one of my friends or The Wife, or some friends at church.

24. Which do you use more often, the dictionary or the thesaurus?

Dictionary, mainly for spelling. I used to be a better speller before there was spellcheck.

25. Have you ever been snorkeling? Scuba diving?

Snorkeling, in Barbados in 1999, but I really didn’t take to it.

Yes, and at least once as a child by several all at once. Not fun at all.

27. What’s the sickest you’ve ever been?

The flu, sometime since I was married, before The Daughter. Out of work all week.

28. What’s your favorite form of exercise?

Since the Y closed, about the only type I get is bicycling.

I think it would have been just a family party. (The only big parties I had were when I was 10 and 16.) Strawberry ice cream, for certain.

31. Are you afraid of heights?

Not especially, though being on ladders doesn’t thrill me.

32. Have you ever taken dance lessons?

Once or twice. Not my strength.

Unfortunately, the Wall Street Journal. The op/ed page is awful, but it has a lot of good coverage of business stuff.

35. What’s the most memorable class you’ve ever taken?

At SUNY New Paltz, American Government & Politics with Alan Chartock, back in 1971, when he was young and creative.

But she muffs the punchline, but laughs hysterically. No real answer.

I really don’t watch commercials anymore. I catch the annoying used car commercial now and then, but it doesn’t really affect me.
However, all-time, it had to be Wisk detergent commercials. “Ring around the collar,” with the wife looking SO ashamed. Seriously, I haven’t purchased Wisk ever since, and that was on back in the early 1970s.

38. If you could go to Disney World with any celebrity alive today, who would it be?

39. Do you prefer baths or showers?

Baths, but I almost never take one.

Pearls Before Swine. Also like, to my surprise, Luann.

Pancakes. My favorite cereal is a Cheerios/shredded wheat mix.

43. If you could have a super power, what would it be?

Not really. I might have thrown a donut hole or two.

46. Name five songs to which you know all the lyrics.

“Favorite” and “informercial” shouldn’t be in the same sentence. I did, when they were novel, watch a couple for Time-Life music.

48. What’s the longest you’ve ever waited in line?

1965 World’s Fair in Queens, NYC for the brand-new (to the United States) creation: Belgian waffles!

49. What’s on the cover of your address book or day planner?

Nothing but the words “Address Book”.

50. Have you ever taken a picture in one of those little booths?

ALL the time when I was a kid, at the Woolworth’s.

0 thoughts on “Stitching a Meme Together”