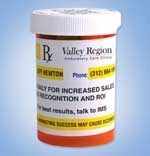 The good news is that a check came to my parents’ house in North Carolina this week. It was a substantial amount, in the low four figures, in response to some class action lawsuit settlement; not positive which drug was involved. The company issuing the check is a pharmaceutical company who I won’t name; we’ll just call it A-Z.

The slightly not-so-good news is that the check is made out to Leslie H. Green, my father, who is deceased, has been deceased for nearly ten years. This is quite annoying, since my mother filled out paperwork back in April informing A-Z of this fact. At least the check came to my father c/o my mother, but it doesn’t make it any easier to cash.

At my sister’s request, I contacted A-Z. After going through a couple telephone menus, I reached a real person, who transferred me to another real person, who expressed her condolences at my father’s passing. “How long ago did he die?” “Ten years.”

I was then transferred to the nurse. This was not for MY benefit, but rather CYA for A-Z since the deceased (i.e., my father) died around the time he was taking their medication. The nurse wants to know when he died – “August 10, 2000” – and from what “prostate cancer”. After she was done, she too expressed her condolences at my father’s passing.

Then she transferred me to someone who was going to transfer me to the person who could address my question. She expressed her condolences at my father’s passing.
I was told I would be on hold for three minutes, then someone would pick up and help me. Instead, I was on hold for two minutes, then I was disconnected.

OK, so I call A-Z back. After eventually getting a real person again, I conveyed to her why I had called, and also that I had already spoken to the nurse. I was transferred to someone who was going to transfer me to someone else, when I indicated that was the point I had gotten disconnected the LAST time I called. She stayed on the line the full three minutes (or more – I didn’t time it) that I was waiting, then made the transfer, after expressing her condolences at my father’s passing.

As I explained this to my sister, it becomes clear to us that since my mother had the check in hand, and that who knows how long it would take A-Z to reissue a check – and they don’t relish the expense of doing this again – they should try to deposit it. If that didn’t work, they (my mother and sister) would set up an estate account for my father and deposit the check; this might require setting up a DBA of some sort, but it would be worth it.

So I spent a half hour during the week leading up to Father’s Day being reminded that this is the 10th Father’s Day I’ve spent without my father. I knew that already, of course, but I did want to thank A-Z, who COULD have, I’m thinking, written the check to my MOTHER, and keep me from all this rigamarole. Just saying.
***

I state this every year, but it is no less true for that: I wish my father had had the opportunity to meet my daughter.