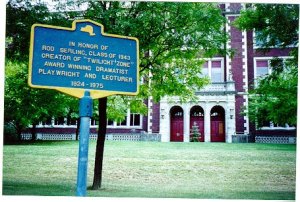 The vast majority of the relatives I can find were born in New York State. Some were from Pennsylvania, probably in an area not that far from Binghamton, NY.

I was in Binghamton proper this past weekend, though only in passing, for the aforementioned family reunion. A lot of my my wife’s family are from the Binghamton area, though I was unfamiliar with them when I was growing up. 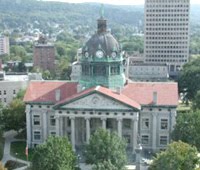 Strange change to the nomeclature about the Binghamton metro. It is now called Greater Binghamton. The airport is called the Greater Binghamton Airport. When I was growing up, it was called the Triple Cities, which included the villages, not cities, of Johnson City and Endicott. Greater Binghamton, ironically, has been getting smaller. There used to be two public high school, and now there is only one, pictured above; that’s the building, now augmented, that my mother, my sister Leslie and I used to go to, once Binghamton Central HS (the blue and white of the Bulldogs), now Binghamton High (the red, white and blue Patriots).

Several interstates run through the city. I-81, which runs north/south (fastest way to get from Syracuse, NY to Scranton, PA is through Binghamton); I-88, which the late state Senate Majority Leader Warren Anderson got built from Binghamton to Schenectady, near Albany, even though it pretty much parallels NY Route 7. A new Route 17, which will eventually become I-86, was started when I was in high school, which involved tearing down some perfectly decent housing just a block north of my late grandmother’s old house. I used to ride my bicycle on the completed, but not yet opened, highway. I’ve successfully had to relearn how to get from one part of the area to another via highway, rather than the local roads.