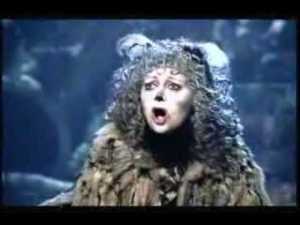 CATS was playing at Proctor’s Theatre in Schenectady this past weekend (July 16-18). I had never been to a production. Other than knowing that it was based on some minor poems by T.S. Eliot, and that Andrew Lloyd Webber and his ex-wife Sarah Brightman were involved, I knew surprisingly little about it. So the wife, daughter and I went; we got some seats on the side, about 2/3s of the way back, and we had a good sightline, especially since much of the action seemed to skew stage left (audience right), where we were. Separately, my brother-in-law, his wife and their two daughters also attended.

Did you ever see a performance, whether it be a band or orchestra or play, where you recognize the tremendous talent of the performers, the excellent technique of the stage crew (I rather liked the lighting, which was strewn into the audience section), the imagination of the set design, yet somehow feel really disengaged from the performance? That’s how I felt about much of the first act. Oh, there would be a song or two that gained my attention, followed by gaps where I nearly fell asleep. Then near the end of the first part, a song I recognized: Memory. Oh, THAT song.

The second act featured a bizarre segment that none of the people I knew who had seen it years earlier remembered: a what the @#$! pirate motif. Still, the second act was stronger, if only because there was some sense of linear storytelling. The one downside, a reprise, and another reprise and maybe a third, of Memory.

Other distractions, not the fault of the production people. The guy in front of me needed to scratch his head, but does he need to hold his arm perpendicular to the top of his head, thus obliterating my sightline? And the guy behind me eating M&Ms; the eating wasn’t the problem, it was the repeated pouring them into his hand.

Afterward, we saw folks from church who told us about how someone from their previous church wrote a sermon about the theological significance of the story. I suppose this refers to the cat who goes up on a hovercraft that reminded both my wife and me of Close Encounters of the Third Kind. The sermon writer wept at the end of Cats; wish I had had such a visceral reaction.

I mentioned to the group gathered after the production that CATS was the second longest Broadway production ever. People asked me what was first, and I was drawing a blank – I HATE when that happens. Was it Chorus Line, Rent? No; I knew I’d know it if I heard it.

Turns out to be Phantom of the Opera, another Lloyd Webber product I’ve never seen. Check out the Wikipedia site, which seems to be updated weekly, or the Internet Broadway Database – IBDB.com, for the current status of each show.

0 thoughts on “The Cats' Meow”