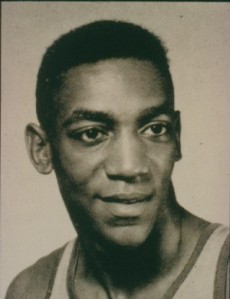 Bill Cosby is an iconic individual in my life. It started out with three albums that I listened to so often that I could cite dialogue as well as I could Beatles lyrics, which is to say, quite well.

The problem with describing comedy, though, is it involves context, character development and timing. As the cover of I Started Out as a Child (November 1964) notes, “Cut left at the black Chevy” (from Street Football) is not inherently funny, except as described by the Cos. The album also featured Oops!, a brief bit about the fallacy of the perfection about doctors; and The Lone Ranger, about the masked man and Tonto getting drunk, with the Ranger’s horse Silver telling him, “Get off my back!” But the album also deals with serious topics. Medic is about him being one; “zonked means dead”. And Rigor Mortis, about American funerals, along with my preternatural reading of The American Way of Death by Jessica Mitford, helped formulate my preference for cremation over the casket at an early age.

On Why Is There Air? (January 1965), in Driving in San Francisco, he discusses Lombard Street so accurately that it shows up in the Wikipedia description:
“They built a street up there called Lombard Street that goes straight down, and they’re not satisfied with you killing yourself that way—they put grooves and curves and everything in it, and they put flowers there where they’ve buried the people that have killed themselves. Lombard Street, wonderful street.” (audience reacts with knowing cheers and applause). So the one time I went to San Francisco, in 1988, you KNOW I had to go there.

That album, in $75 Car, has one of the few actual jokes. After Bill has hit a tree, he realizes he has a bunch of tickets in the glove compartment, “Which are like Savings Bonds; the longer you keep them, the greater they mature.”

But arguably the best, and in any case my favorite album, is Wonderfulness (May 1966), with Tonsils (lies about “all the ice cream in the world”), The Playground (conspiracy by the adults to knock off all the kids), Go Karts (900 cop cars!), and the radio drama The Chicken Heart. This album is so good that when we were driving down to Charlotte, NC in April 2010 and I saw this on CD at a convenience store in Virginia for $5.99, I had to buy it and give it to my 19-year-old niece. 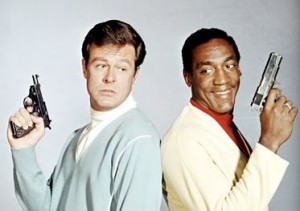 At the same time as those early albums came out, indeed because of those albums, producer Sheldon Leonard teamed Cosby with Robert Culp in a show called I Spy (1965-1968). Not only was it the predecessor of the “buddy” cop shows and movies, I Spy was the first television show to feature a Black actor in a lead role. Bill Cosby won three consecutive Emmy Awards for Outstanding Lead Actor in a Drama Series in 1966, 1967 and 1968. Robert Culp was also nominated in the same category for all three seasons of I Spy. One can find old episodes of I Spy on Hulu, at least in the United States.

I watched Cos on The Bill Cosby Show, about a school teacher, then the kids’ show, Electric Company – an example here – even though I was in college.

Bill Cosby did films, worked on a cartoon series, and did Jell-O commercials – which he’ll be doing again in 2010. Cosby earned a Doctor of Education degree from the University of Massachusetts. “For his doctoral research, he wrote a dissertation entitled, “An Integration of the Visual Media Via ‘Fat Albert And The Cosby Kids’ Into the Elementary School Curriculum as a Teaching Aid and Vehicle to Achieve Increased Learning”.

Then he saved the American situation comedy with The Cosby Show. Don’t believe me? Check out Ken Levine, writer for the TV shows M*A*S*H and Cheers, among many others. The 1984-1992 show revived a moribund format in the U.S.

The program portrayed black American life as normal, if by “normal”, you mean having a doctor and a lawyer as the parents. It regularly displayed African-American art, music (especially jazz, a Cosby love) and culture as a normal part of everyday life. Here’s a piece of Night Time Is The Right Time.

I always loved the changing theme songs myself:

He’s best known recently for his controversial call for black Americans to take more individual responsibility, for which some have castigated him for blaming the poor. His book Come On People: On the Path from Victims to Victors is a New York Times bestseller.

0 thoughts on “C is for Cosby”