I don’t know about you, but I think that English is a bit of a tricky language to learn. Not so much for me as a native speaker, but for others first learning the language in countries where English is not primary, especially as one gets older. The example above from an early Dr. Seuss book is a perfect reflection of what I mean; the “ough” sounds like uff, off, ow (rhymes with cow), and a long o, respectively.

Yet, English is on its way to becoming the world’s unofficial international language. “Mandarin (Chinese) is spoken by more people, but English is now the most widespread of the world’s languages.”

How the heck did THAT happen? Here’s a a short history of the origins and development of English. 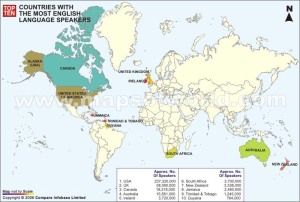 What IS English, anyway? As this article states: it belongs “to the Germanic languages branch of the Indo-European language family, widely spoken on six continents… The primary language of the U.S., Britain, Canada, Australia, Ireland, New Zealand, and various Caribbean and Pacific island nations, it is also an official language of India, the Philippines, and many sub-Saharan African countries. It is one of the most widely spoken languages in the world (approximately 1.5 billion speakers), the mother tongue of more than 350 million people, and the most widely taught foreign language… Written in the Latin alphabet, it is most closely related to Frisian, German, and Dutch.”

I have been long fascinated by the differences in the English language from country to country. It’s not just the extra (or missing, depending on your POV) U in color/colour, or the extra/missing syllable in aluminum/aluminium. It is a whole different way of thinking. One of my favorite places to read about this phenomenom is Separated By A Common Language by an American expat in Britain named Lynneguist, who is a linguist (get it?) Recently she asked, Why is it the Mississippi River in the US, but the River Thames in the UK? 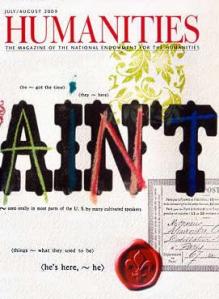 So, frankly, I found it hysterically funny to read about whether an Academy of English is necessary. Or put another way: does the English language need protecting? This Academy would be along the same lines as what the Académie Française tries to do for French: protect the language from “impurities, bastardisations and the horrors introduced by the text-speak generation”.

But the great strength of English IS that it’s a mongrel language. Look at the etymology of some English words here, or at least skim this PDF article.

So, I have some trouble with the English-only crowd in the US. Not only may it be detrimental in the learning process of immigrants, as this reports suggests, it cuts off the wonderful flavor of a vital language.

This video asks: What is the Future of the English language? Will it continue to be the lingua franca, or will it be supplanted? Interesting questions, these.
***
A conversation between Ellen DeGeneres and Hugh Laurie; she’s an American TV host, he’s a British actor best known for playing the title character in the American TV show House. And while I knew little of what he was talking about, I was even more flummoxed by HER examples.
***
Pretty much off topic: Broken English by Marianne Faithfull, a “live” performance and the original video.

0 thoughts on “E is for English language”