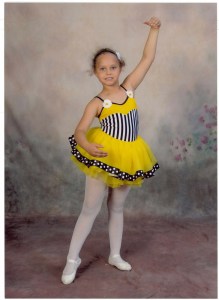 As I may have mentioned, Lydia has been taking ballet lessons once a week since October 2009. It was almost inevitable, since in the year or two before that, she would move around the room so gracefully and deliberately that people kept asking, “Is she taking dance lessons?”

This was NOT anything that we pushed her into doing, but rather something she asked to do a few times before we relented. While I’m not anticipating her become a prima ballerina, it has instilled in her a sense of confidence she had been lacking. It has also made Angelina Ballerina on PBS her favorite TV program.

Her school did a recital in June – this was Lydia’s costume – and she said she was nervous, though she didn’t appear to be so.

Now, she is choreographer at home; not only does she design the moves, she selects the music, quite well, I think. Her mother has become her primary dance partner, with her stuffed animals and me as her captive audience. 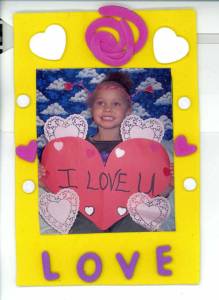