I always get annoyed with people who don’t read blogs who complain about blogs collectively, saying something like “No one cares what somebody had for breakfast.” The vast majority of blogs that I’ve looked at don’t deal with such minutae.

That said, this will be one of THOSE posts.

First off, my daughter, my wife and I have all been in some state of unwellness for the last couple weeks. I stayed home with my sick daughter last Tuesday. I stayed home myself on Monday. My wife took off a couple afternoons last week; she would have taken off the whole days except she couldn’t get a substitute earlier. Then she went to the urgent care place on Saturday, fearing she had bronchitis, since she’s had it before. The diagnosis: a bad cold; the doctor said that he’s seen colds, which usually run their course in 3-5 days take twice, or even thrice as long this season.

Sunday, went to a GREAT play, 33 Variations, which I wrote about, briefly, HERE; if nothing else, play the music links I provided. But I was almost too tired to go. 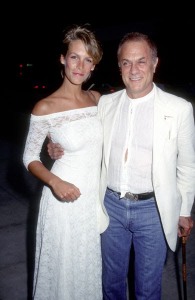 I think my illness and/or allergies, and the fatigue it generated, actually messed up my thinking process. When I heard that Eddie Fisher died, I somehow confused him with Tony Curtis. Or more properly, I confused their daughters, Carrie Fisher and Jamie Lee Curtis, both actresses in many films I’ve seen. It didn’t help that I saw Jamie Lee Curtis interviewed on the same CBS Sunday Morning episode that they announced Eddie Fisher’s death, and Jamie Lee talked about the great relationship she now had with her father. Then Tony Curtis DID die that very week; as a kid, I knew him better as the inspiration for Stony Curtis on The Flinstones cartoon, but I eventually saw him in Some Like It Hot (great), The Defiant Ones (pretty good-Oscar nominated), and Spartacus (not so good).

A couple interesting points from his obit:
In 1987, Curtis started the Emanuel Foundation for Hungarian Culture in honor of his father. The organization has since donated funds to help refurbish Budapest’s Dohany Synagogue, the largest in Europe.
In 2003, Curtis shot two commercials in Budapest, which Hungary hoped would help rebrand it as a center of spa and “wellness” tourism, ditching the traditional image of paprika and gypsy music.

The deaths of Eddie Fisher and Tony Curtis will always be linked in my mind.

Well, I’m STILL tired, so that’s it for now.

0 thoughts on “I Had Cereal for Breakfast”