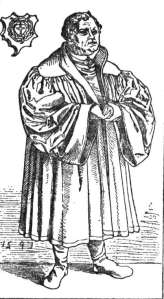 It’s Reformation Sunday tomorrow. As a long-time Methodist, I had no idea what that meant, and had barely heard of it. But now, as a Presbyterian, in a church in the “Reform tradition,” it’s a bigger deal. It commemorates the day in 1517 when Martin Luther nailed his 95 theses to a church door.

Someone sent me this a couple days ago:
We religious instruction teachers are always looking for ways to engage the students. In my class last year, I likened Martin Luther’s dilemma to: how would they (the students) feel, if they came home to find their families imprisoned and tortured, and it won’t stop until they say that Sammy Hagar was Van Halen’s better frontman? We’d all agreed, beforehand, that Van Halen’s a great band, “but you MUST renounce Diamond Dave, and embrace Sammy, or you’ll get your dad’s OTHER EAR in ANOTHER package!” They stood up at their table, and shouted & pointed in my face, and I had soooo much fun getting them all stirred up while humming “Why Can’t This Be Love?” and dissing the tune to “Panama…” It’s why I teach 🙂

There was also a link to something called the 95 Theses, a 2007 rap done to the tune of Jay-Z’s 99 Problems. I’ve provided three links; the third starts with a short commercial.

If you havin’ Church problems then don’t blame God, son
I got ninety-five theses but the Pope ain’t one.

Listen up, all my people, it’s a story for the telling
’bout the sin and injustice and corruption I been smelling:
I met that homie Tetzel, then I started rebelling…
One Five One Seven – that’s when it first went down.
Then the real test was when it started spreading around.
Sixty days to recant what I said? Father, please!
You’ve had, what? Goin’ on fifteen centuries?
“Oh snap, he’s messin’ with the holy communion.”
But I ain’t never dissed your precious hypostatic union!…

I was struck most by this section:

But you forgot about me and my demonstration?
Like you can just create your own denomination?
“We don’t like this part, so we’ll just add a little twist.”
Now we Anglican, Amish, and even Calvinist.
I gave you the power, you gone and abused it.
I gave you God’s truth, you just confused it.

I’ve long wondered what God did think of all of the different denominations, some created more by differences of style than of doctrine. Is God pleased with the diversity of worship experiences, or is She really ticked off? What do YOU think?

Shout out to Johann Gutenberg … I see you baby.