As you may be aware, sales of physical manifestations of music have been dropping like a stone, in favor of digital forms. The Record Industry Association of America notes that, from 2007 to 2009, the sale of digital music (i.e., downloads) grew from 23% to 34% to 41% of the market in the United States. 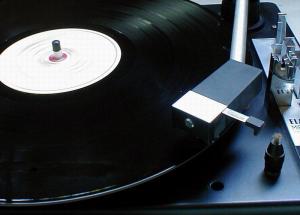 Yet the statistics also reveal a countervailing trend. The sale of long-playing, and extended play records (LPs and EPs), made from vinyl, has INCREASED over the same period, from 1.3 million units to 2.9 million to 3.2 million. These are minuscule numbers compared with the hundreds of millions of albums sold annually in the LP’s heyday in the 1960s through the early 1980s, when compact discs were introduced. Still, it’s an interesting phenomenon.

And this is not solely an American phenomenon. Vinyl is also enjoying a renaissance in Great Britain as well.

Personally, I haven’t purchased vinyl since about 1989, a Ray Charles greatest hits album. The forces promulgating CDs made it too difficult for me to pass up the shiny objects by putting on an extra cut on the CD not present on the LP, e.g., Murder by Numbers on Synchronicity by the Police and This Is the Picture (Excellent Birds) on So by Peter Gabriel.

Yet I never gave up my vinyl. And when friends of mine did decide to get rid of their 12″ platters, they often gave them to me. I put my LPs in full order in 2010, for the first time since we moved into our house in 2000. I’ve discovered that I now have developed my collection of Frank Sinatra and Barbra Streisand, e.g. It’s also why I currently own multiple copies of Fragile by Yes; Deja Vu by Crosby, Stills, Nash and Young, and of course, Tapestry by Carole King, the longest charting album by a female solo artist.

I think I’ll hold my LPs for a while. Some of them have tracks that I haven’t found anywhere. Maybe one day I’ll get one of those machines that turns vinyl into digital. Meanwhile, I’m enjoying playing my vinyl, looking at artwork that’s about six times the size of what you’d find on a CD.

(It suddenly occurred to me that younger readers may not understand the title. LPs are played on record players at 33 1/3 revolutions per minute, as opposed to singles, which are 45 RPM, and earlier vinyl recordings, which were 78 RPM.)

0 thoughts on “T is for Thirty-Three and a Third”