Yet, when making a list of his six best movies – ZELIG, PURPLE ROSE OF CAIRO, HUSBANDS AND WIVES, VICKY CHRISTINA BARCELONA, BULLETS OVER BROADWAY, MATCH POINT – Annie Hall was not among them. Is it unreasonable to suggest that a director is mistaken about his own films? I saw all the movies mentioned except Match Point; I can say that Vicki Christina Barcelona clearly does NOT belong on this list. I’d be hard-pressed to actually come up with my other five on a list – Hannah and Her Sisters, and Zelig, for sure, maybe Bananas, Broadway Danny Rose, Crimes and Misdemeanors, Purple Rose of Cairo, Radio Days, or even Manhattan if the parallel with his actual life didn’t creep me out so much. 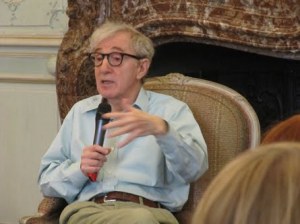 Slate takes a crack at Copy-Editing the Culture: The Rise and Fall of Woody Allen, as Experienced Through His Punctuation.

Read some interviews, some recent, some historic, that delve into Woody’s mind. Also, on May 6, 1971, Johnny Carson’s guest host on The Tonight Show was Woody Allen, whose guests included Bob Hope and James Coco.

Happy birthday, Woody. No matter how much I think you’re off your game, you provided me with great cinematic pleasure for many years.