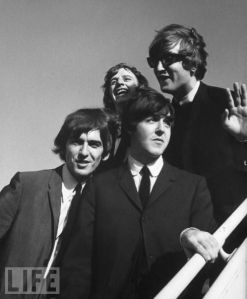 JEOPARDY! Answer du jour – SPORTS STARS: Born in 1980, this [former] world champion figure skater was named for a Beatles hit. Question is below.

The rules of engagement

163 I’m a Loser from Beatles for Sale (UK), Beatles ’65 (US). Another downer from the Beatlemania period.
162 Something from Abbey Road. A nice, though overplayed song. But I was always a bit peevish about the way Harrison stole the first line from James Taylor, when he was signed by Apple.
161 Little Child from With the Beatles (UK), Meet the Beatles (US). Nice little early tune. At some level, the earliest songs, with few exceptions, will fare less well than the middle period work. I didn’t buy Meet the Beatles album until about when Revolver came out, and as I recall, it came from my record club in STEREO when I had a mono player. At the time, these things just did not mix. Eventually I said, the heck with it and played it anyway, to no discernible harm.
160 Ob-La-Di, Ob-La-Da from the white album. Another Macca dance hall song. Fun enough.
159 Only a Northern Song from Yellow Submarine. My favorite thing about this Harrisong is the title, referring to the company that published Beatles’ songs.
158 Not a Second Time from With the Beatles (UK), Meet the Beatles (US). Really like the bottom of this Lennon song.
157 Honey Don’t from Beatles for Sale (US), Beatles ’65. A nice Ringo vocal on this Carl Perkins song.
156 Cry Baby Cry from the white album. A moody Lennon tune.
155 Anna (Go to Him) from Please Please Me (UK), Introducing the Beatles./The Early Beatles. A nice Lennon cover of the Arthur Alexander song.
154 No Reply from Beatles for Sale (UK), Beatles ’65 (US). Yet another downer. I had discussion of misheard lyrics re this song with my father at the time.
***
Some Beatles fans have fantasized about what the next Beatles album might have sounded like, had the band not broken up in 1970; or if they’d taken a break, then gotten back together. I was never one for such idle speculation but here’s one take and here’s another.
***
Dick Cavett interviews John and Yoko in 1971.
***
JEOPARDY Question: Who is Michelle Kwan? (My wife’s all-time favorite skater.)