Well, if you read the latter comments to yesterday’s post, you know that my mom, Gertrude Elizabeth (Trudy) Green, died yesterday morning. She was 83, had suffered a massive stroke (9 cm, as opposed to the usual 2 to 3 cm) on Friday. And still I was surprised, and yet not. 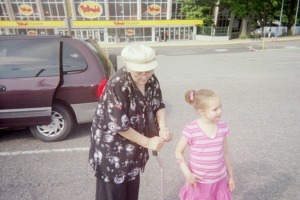 I’ll probably undoubtedly write more on this event over time, but I do want to make a couple of observations.

Thanks for the outpouring of kind words and thoughts and prayers that I have received.

Before each of my parents died, they each had a stroke, though my father’s was less severe. I was the last of the three Green children to arrive in Charlotte, and shortly after each of them saw me, they died. It was as though they were waiting on my arrival so that they could let go. there’s more than a little ambivalence in that.

I think this is interesting. When my father died on August 10, 2000, my sisters were by his side. Marcia had stayed over the night before and Leslie had come to relieve her when he was getting ready to pass. My mother and I were stuck at the house until I found a neighbor to give us a ride, too late.

I had stayed in my mother’s room Monday night, and Tuesday morning, I was amazed how quickly she died, at 8:50 a.m. I called my sisters but she had already passed by that point.

We’re meeting with the mortician this morning, but
the funeral will probably be on Tuesday, to accommodate her out-of-town relatives, and the burial on Wednesday, next to my father, at the veteran’s cemetery 40 miles from here.
***
I’ll probably continue to blog about what I had planned for a few days. Tomorrow, the actual train ride down.

0 thoughts on “A Peculiar Synchronicity”