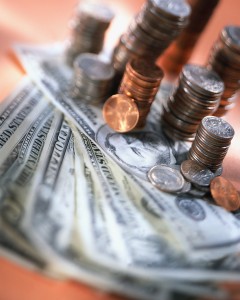 I love money. I hate money.

After my mom died, my sister came across some letters my mom wrote to no one in particular – they’d be journal entries, I suppose, had she put them in a diary. One in particular from November 1995, was about how quickly my father was burning through their retirement savings. My mother was very thrifty, very good with money, but my father was…not, let’s just say.

When I graduated from college, I wasn’t making enough money to pay for my student loans right away, so it wasn’t until about five years after I graduated that I was able to secure a credit card. It was a Sears card, with which I bought a clock/radio for $12.95. I lived too much on my credit cards, especially when I was unemployed or a grad student.

But at the beginning of 2011, I had no credit card debt at all, due in no small part because I won some money on a TV game show a decade ago, and the much more disciplined attitude of my spouse. And now, I can’t STAND to have credit card debt.

It became clear that the money I spent around my mother’s funeral I would not be able to pay off in a month, so right away, I did something I almost never do; I took out a credit card to transfer the charges from another credit card. The latter card is a zero interest card until February 2012, which will facilitate me paying it off without extra charges.

Now, while I’m pretty much off desiring STUFF, I still wish I had more money for EXPERIENCES – travel, specifically. We ARE taking a trip to Canada this year. But if I were less disciplined – and in my heart of hearts, I’m really not that disciplined, I just force myself to act as though I were – I’d be going to a lot more plays and concerts.

Oh, and I hate paying taxes, not just because I can’t get that favorable GE rate, but because I’m a 1040A or 1040EZ (i.e., simple) guy, but since I’ve gotten married, I have had to deal with additional schedules involving various deductions.

So what’s YOUR attitude towards money?

0 thoughts on “The Money Issue QUESTION”