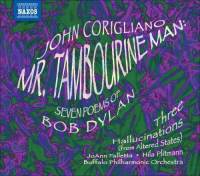 On March 12, 2011, my wife and I got to see the great percussionist Dame Evelyn Glennie perform, with the Albany Symphony Orchestra, a work by Pulitzer, Grammy and Academy Award winner, composer John Corigliano, performing a piece commissioned by her, Conjurer. It was great.

During the intermission, there were several recordings by Glennie and Corilglano for sale. I thought to buy something by Glennie, but I was intrigued by something called Mr. Tambourine Man: Seven Poems of Bob Dylan (for soprano and orchestra), and I bought that instead. In the program notes for the evening, he echoed what he wrote here:

When Sylvia McNair asked me to write her a major song cycle for Carnegie Hall, she had only one request; to choose an American text…. I had no ideas. Except that I had always heard, by reputation, of the high regard accorded the folk-ballad singer/songwriter Bob Dylan. But I was so engaged in developing my orchestral technique during the years when Dylan was heard by the rest of the world that I had never heard his songs.

One reviewer of the recording found it highly suspect that the composer could never have heard “Blowin’ in the Wind”, but having spoken to him briefly after the concert, when he signed my copy, I find it totally plausible.

So I bought a collection of his texts, and found many of them to be every bit as beautiful and as immediate as I had heard-and surprisingly well-suited to my own musical language. I then contacted Jeff Rosen, his manager, who approached Bob Dylan with the idea of re-setting his poetry to my music. I do not know of an instance in which this has been done before (which was part of what appealed to me), so I needed to explain that these would be in no way arrangements, or variations, or in any way derivations of the music of the original songs, which I decided to not hear before the cycle was complete. Just as Schumann or Brahms or Wolf had re-interpreted in their own musical styles the same Goethe text, I intended to treat the Dylan lyrics as the poems I found them to be. Nor would their settings make any attempt at pop or rock writing. I wanted to take poetry I knew to be strongly associated with popular art and readdress it in terms of concert art-crossover in the opposite direction, one might say. Dylan granted his permission, and I set to work.

And, musically, it’s not the Dylan you’ve heard before. On first listen, it is mighty jarring, but subsequent hearing, it begins to make its own sense. If you don’t like operatic sopranos, you won’t like this, but there is something about it that eventually appealed to me.

Possibly more immediately accessible is the other piece on the CD, Three Hallucinations (based on the film score to “Altered States”), a movie I saw in theaters three decades ago.The use of religious themes, specifically a variation on Rock of Ages, made this more gratifying on the initial listen.