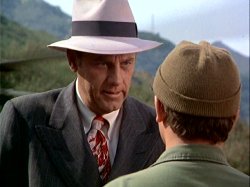 There is a tradition among many not to reveal surprise endings of movies and even TV shows until enough people have had a chance to see them, which is quite honorable.

But what I’ve noticed lately is that the TV shows themselves are at least leaking possible story bits to the media. The very first Law & Order: LA this spring notes that someone will die. Other shows, such as those alphabet soup programs (CSI, NCIS) tease that “a hero will fall.” Is it that we should watch because someone will die? What happened to the element of surprise. See, e.g., the death of Colonel Blake at the end of the third season of the TV show M*A*S*H.

I contrast this with The Good Wife on CBS. A big reveal a few weeks ago was that the lead character’s husband had slept with her work friend. But ah, it was a couple weeks later before the GW herself finds out the news, and it is devastating for her, and for the viewer. The surprise maximized the impact.

I read movie reviewers relish not knowing about the films they are going to critique; optimally, the movie trailer will not make actually seeing the film redundant.

So how do you like to see TV and movies? Does knowing too much wreck the experience?