There was a 1980 hit song by a group called the Barracudas called Summer Fun, from an album I happen to own; in fact, a mail order customer at FantaCo sent it to me in gratitude. The introduction to the song comes from an ad c. 1967; the story line was that a Plymouth car dealer couldn’t say the word Barracuda, problematic because the hot Plymouth car that year was supposedly the Barracuda. (The whole ad can be heard, after the 27 second mark, here.

What reminded me of this was the fact that I was doing a reference question last month and realized I could not say the word ‘aesthetician’, though I can say the root word ‘aesthetic’; it’s the two middle syllables. Arthur noted on a podcast that he cannot say ‘vitiligo’, a condition I have.

On the other hand, some words that I just LOVE to say. They tend to be French or Italian, and often end in a vowel, such as Rigoletto or Giovanni. But last month at work, I was really getting off saying the Japanese word ‘yakitori’, which means skewered chicken. 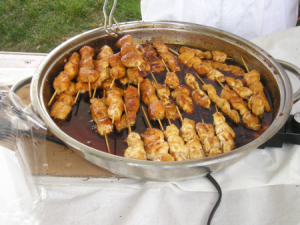 Also, there are a number of words I could say, but never having seen them in print, I was shocked to find that they were spelled THAT way. Two that come to mind are ‘epitome’ or ‘facetious’.

0 thoughts on “I Can't SAY That Word QUESTION”