Simple query this time: what are your favorite sports? Are there versions or levels of the sport you enjoy more (or less)?

For instance, I like baseball. I like Major League Baseball, like watching it on TV, though I hate the fact that the National League has 16 teams and the American League has 14, for reasons Scott discussed here. But I really enjoy attending Minor League Baseball. College baseball’s interesting, but they still use those aluminum bats, which I find to be a sacrilege at that age level. If the Little League World Series happens to be on, I’ll watch it. 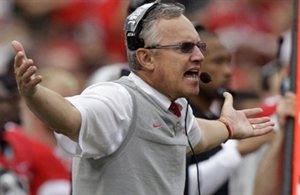 I like football. I like the NFL, and particularly how the divisions are even. The league has found a way to distribute money more equitably so that there is more parity than in the college game. While I like the college game, I hate how it’s become a quasi-professional league, which in turn has caused several teams’ victories to be voided. Alabama and Ohio State (disgraced coach Jim Tressel, pictured), and several other teams have had their wins vacated in the past couple seasons, with the expectatation of it continuing in the future.

College basketball can also be subject to fraud. But the March Madness scheme, allowing teams from “weak” conferences to compete with the “major” conferences, unlike in football, makes the season more exciting. Meanwhile, it seems that half of the NBA gets into the playoffs anyway, making the regular season almost meaningless.

What are your sports favorites and dislikes?