Labor Day of the year BEFORE the election, is the point at which the Presidential campaign is supposed to begin, although we’ve already had one candidate withdraw from the race already (Tim Pawlenty) and others teasing before declining (Donald Trump, Mike Huckabee). Then there are those who someone wants him to run but he said no (Chris Christie, Mitch Daniels, Paul Ryan) and one who is still teasing about running (the ubiquitous Sarah Palin). 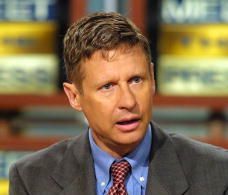 I’m fascinated by this list of Presidential candidates. Randall Terry is running for the Democratic nomination? Really? It’s the first I’ve heard of this.

And why are some Republicans (Herman Cain, Rick Santorum) considered viable enough to appear in the Republican debates, but others (former governor of the swing state of New Mexico, Gary Johnson, pictured) not so? I mean *I* wouldn’t vote for him, but that’s true of a number of the contenders.

When do you start seriously paying attention to your national elections? I suppose for me, it’s when the calendar turns to a number divisible by four. Do you have a candidate already that you’re supporting? For me, it’s more of a process of elimination: not him, not her; definitely not him. And this reflection from a former GOP operative helps explains why.
***
Primary day in New York State is Tuesday, September 13. As of this writing, I have no idea who’s running for what in my area.

0 thoughts on “If the Election Were Held Tomorrow QUESTION”