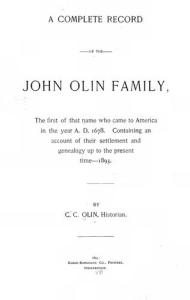 For over 75 years, various branches of my mother-in-law’s family have gotten together for family reunions. But at some point, the Olin Family Society, founded in 1992, decided to have an international reunion every five years. In 1996, it was in Fargo, ND; in 2001, in Binghamton, NY, which we attended; and in 2006, in Pasco, WA, which we did not attend, because we thought taking a two-year old who didn’t travel well on a transcontinental flight as her first airline experience was a lousy idea for all concerned.

The Olins trace their lineage back to the late 17th century, when John Olin, a 14-year old cabin boy who was an indentured servant, forced into service on the British ship Man-O-War, jumped off the boat heading for Boston harbor. He swam ashore, stealthily traveled inland for about a week, and ended up in the care of the Narragansett Indians for eight years. He became an indentured servant to a Samuel Gorton until 1700, when he became a free man. John married Susannah Spencer on October 4, 1708. She was believed to be an ancestor of Diana Spencer, who married Prince Charles of England, and had a couple sons. John and Susannah had four known children, Joseph, John, Henry and Eleanor.

The drive from Toronto to Peterborough, once we got out of Toronto traffic, was uneventful. Stayed at a functional but unremarkable Best Western; 2nd floor again, no elevator. We attended the ice cream social Friday night at the church where the event was held, just past the Quaker Oats plant; a decent number of folks turned out, but Saturday was the main event.

Someone at the reunion made nametags for everyone who had preregistered that listed, not only the Olin family member, but also their spouse, all the generations back to John and Susannah. My wife, and therefore my daughter, are in the John-Joseph-Joseph-Reuben-John-Earl-Orva Lee-George Omar line. George married Leona G. Ruland, and they had 8 children (all of whom were still alive six years ago, though a few have passed since), the sixth of whom was my mother-in-law. So my wife’s name tag and mine showed 10 generations, and my daughter’s, 11. 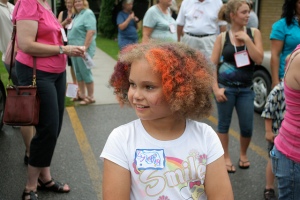 A meeting was held in the morning, during which the daughter and I played Uno, with info of genealogical finds. After a delicious lunch, the kids got to do face painting, hair coloring and horseback riding. I too got my hair sprayed, and I’m sure there’s photographic proof somewhere, but not here.

There was an auction in the afternoon, during which I purchased the 1893 tome cited above, then a great dinner, with lots of homemade pies for dessert. Then Sunday morning, a great brunch before people took off on the road, in our case, back to the USA.

Lots of great people at this event.