I recently read this great article by Patio Patch (Laura from London, UK) about how to be an awards-free blog without seeming ungracious. She noted: “As an ingenue exploring the blogosphere I was surprised to see prominently placed ‘award free blog’ buttons. At the time I considered these to be rude presumptions of a confetti of accolades but hindsight has shown that this is a politely circumspect way of side-stepping the issue.”

I hadn’t, in fact, gotten any awards in a while, so I was thinking that, in my existence, it had become a moot point. 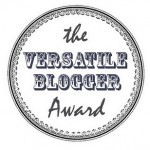 So naturally, at that point, I get an award from Dustbury, one Charles G. Hill, who, as the person who nominated him put it, “might cover social media, automobile tires, basketball, My Little Pony, print magazines, transportation in Oklahoma, women’s shoes, and Zooey Deschanel — all with enviable literary skill and brio.” I came across him initially because he knows more about Warner Brothers Loss Leader LPs than any sane person should.

The seven random things aren’t all that difficult for me; they are usually strands of blogposts I could never finish.

1. I’ve totally changed my sense of my personal history and time, especially since I began blogging. I used to believe that I would go from one chapter to another in life. But now I see it as one long continuum, with things from my past often playing more significant roles in my present than I ever would have guessed.

2. On two different occasions, I dated for a time a woman who was at least a decade older than I was. Indeed, for the majority of my dating life, I’ve gone out with women in their 40s. That includes my wife, who’s younger than I.

3. The only trophy I ever won was for racquetball. The racquet broke off the trophy, but I’m still keeping it, in the office I’m writing this, actually.

4. The ONLY time I’ve EVER done the chicken dance was in Galveston, TX in 1995. It was at a work conference

5. My Twitter name, Ersie, is based on a stuffed monkey I no longer own.

6. We have drawers of random electronic and computer junk I should probably throw out, but haven’t, because I have the bizarre notion I might need them, in most cases because I never knew what they really did in the first place.

7. I can probably name more New York Giants (football) and New York Yankees (baseball) players from the 1960s than the 21st century.

And now for my designees for the award. Ready? (Drum roll, please.)

YOU. That is, if you don’t mind getting awards, if you like giving awards to others, by all means, consider yourself so dubbed by me. And if you WANT me to specifically call on you, then let me know, and I will. But if you’re award free, don’t let me ruin the streak.

0 thoughts on “To Award, or Not To Award; That is the question.”