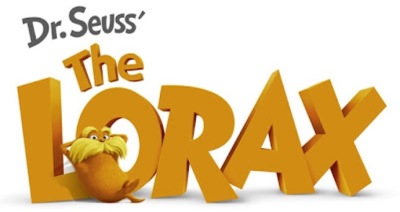 I promised my daughter that we could see a movie last Saturday. What I had in mind was The Secret World of Arrietty, based on The Borrowers books. Unfortunately, it was in town for two weeks and then it was gone. Boo hiss. Since my wife had gone to see another film – Pina – the Daughter and I decided to see The Lorax at the Madison Theatre in Albany.

While I was/am a fan of Dr. Seuss, I was totally unfamiliar with the Lorax book, as was my daughter. In the movie, treeless Thneedville is where everyone seems to have the perfect suburban life. Well, almost. Mr. O’Hare (Rob Riggle), who vaguely looks like the superhero boss lady in The Incredibles, gets to sell folks air. Young Ted (Zac Efron) is smitten with Audrey (Taylor Swift), and when she (somehow) starts drawing trees, real trees, and desiring to see them, Ted springs into action.

What follows is Ted talking to the Once-Ler (Ed Helms) about where the trees all went. He tells the story involving the Lorax (Danny DeVito), and I don’t want to reveal any more plot points, except that Ted’s grandma (Betty White) runs interference for Ted re: his mom (Jenny Slate).

The movie seemed to want to play to every audience. The Mission: Impossible theme for the adults – the animals were occasionally funny, though too cute; a sense of (not too much) danger for older kids; an an environmental message as subtle as the the Once-Ler family RV.

There were occasional good bits. The cameras everywhere reminds me of the movie The Truman Show, or modern-day London or New York City. The budding romance had a couple moments I could relate to. I laughed a few times. But ultimately, I thought it was a bit of a mess. The Lorax was a major player in such a small part of the movie. And paying extra for a 3D effect, which I could have done without, did not endear me either.