Because it’s been 60 years since she ascended to the throne in the United Kingdom, there have been a number of commemorative coins and stamps issued with the image of Queen Elizabeth II in 2012. But long before that, QEII’s image has been showing up around the world.

I came across The Portraits of Queen Elizabeth II, as they appear on World Banknotes, which is an interesting evolution of the Queen, now in her ninth decade.

Her portrait was first featured on coins in 1953 issued in Great Britain, Australia, Canada, Fiji, Jamaica, Malaya & British Borneo, Mauritius, New Zealand, South Africa and Southern Rhodesia. Whether or not she is wearing her crown depended on the monarchy’s relationship with the country. Someone asked: How many countries coins has Queen Elizabeth II been on? The best answer seems to be from Sap, posted 1/27/2010, from which I will note here (since the permalink doesn’t work):

Australia, Bahamas*, Belize, Canada, Cyprus*, Dominica#, Gambia*, Great Britain, Grenada#, Jamaica*, Kiribati#, Mauritius*, New Zealand, Nigeria*, Papua New Guinea#, Saint Kitts & Nevis#, Saint Lucia#, Saint Vincent & Grenadines#, Seychelles*, Tuvalu, Uganda*, Zambia*, plus Fiji (“a Republic and expelled from the Commonwealth but still has the Queen on all its coinage”). This doesn’t even count the various former colonies in Africa, the Caribbean (including the current Guyana), Hong Kong, and what is now Malaysia and Singapore, all of which had had QEII on the money in the day.

Check out a timeline of the Queen’s appearance on Australian coins. 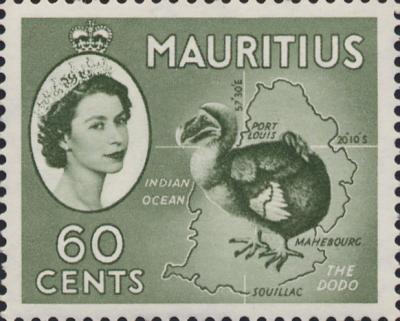 As for postage, you find useful Queen Elizabeth II: A Portrait in Stamps (Paperback) By Fay Sweet. The description of the book: “Since her accession to the throne in 1952, the Queen’s image on UK stamps has become one of the most familiar and reproduced icons of all time. This book illustrates the reign of Her Majesty as celebrated on Britain’s stamps.” Here’s a List of British postage stamps. This commercial vendor has a detailed QEII section.

In Canada, there is have been annual definitive stamps bearing the Queen’s likeness. I couldn’t find as definite a piece about QEII on stamps as I did for coins, but I expect a large overlap.

All of this is very, well, foreign, to me, since no living person can appear on US postage or money. There will postage stamps commemorating former Presidents a year after they die. The FDR dime and the JFK half dollar were both issued in the year following their respective deaths (1946, 1964, respectively).