From here: “The stencil duplicator or mimeograph machine (often abbreviated to mimeo) is a low-cost printing press that works by forcing ink through a stencil onto paper. Mimeographs…were a common technology in printing small quantities, as in office work, classroom materials, and church bulletins. Early fanzines were printed in this technology, because it was widespread and cheap. In the late 1960s, mimeographs… were gradually displaced by photocopying and offset printing.”

This is just one of many technologies I was not particularly good at. But my father, who usually did the bulletin even into the early 1970s at our church, Trinity AME Zion in Binghamton, NY, was excellent at typing the stencil, then wrapping it “around the ink-filled drum of the rotary machine.” When I attempted to do this, the stencil was always wrinkled, and the subsequent output of copies not particularly attractive.

A YouTube video of the Gestetner 180. My wife still remembers mimeos in her small rural school district as recently as the early 1980s.

Here’s something I did not know: “The word ‘mimeograph’ was first used by Albert Blake Dick when he licensed [Thomas] Edison’s patents in 1887.” The A.B. Dick Company of Chicago once owned the trademarked name, but “over time, the term became generic and is now an example of a genericized trademark.” 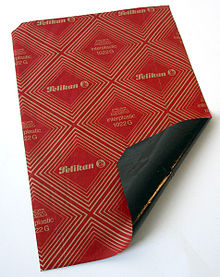 But what if you were going to write something, and you wanted to have one or two copies of it? From The Exciting History of Carbon Paper! “Carbon paper is thin paper coated with a mixture of wax and pigment, that is used between two sheets of ordinary paper to make one or more copies of an original document.”

To this day, I have copies of correspondence from the 1970s and 1980s, back in the day when I used to write something called “letters.”

Of course, the limitation of carbon paper was that it “could only produce copies of out-going correspondence…; if copies were needed of incoming documents, they still had to be copied by hand. This problem was not solved until the middle of the twentieth century, when xerography became commercially available in the form of the photocopier… The invention of the photocopier began the decline in demand for carbon paper that has continued to the present day.”

Still, the terminology of making a “carbon copy”, or cc, has survived, in e-mails. One can even make a bcc, or blind carbon copy, with no wax and pigment required.