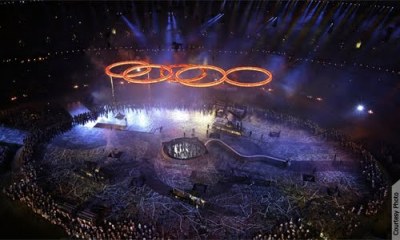 My niece (wife’s brother’s daughter) has been staying at our house for much of the last three weeks. She is really into horses; she even owns one. So when she wanted to watch TV, and they had show horses jumping over barriers, we ended up viewing that. Which led to watching some other activities. Sunday morning, live, I got to watch Andy Murray of the UK beat Roger Federer of Switzerland, one of the greatest tennis players in the world, in straight sets, four weeks to the day after Federer beat Murray at Wimbledon, at the same venue. I was fist-pumping so much that my daughter demanded that I stop.

Then Sunday, Monday and Tuesday night, we were up until 10 or 11 pm, watching various events. This was partially a function of being on vacation, with no chance to record the programs. (And no real desire to; one cannot watch old sports events.)

Jaquandor asked a series of Olympic-related questions, and I started answering them at his blog, when, suddenly, I realized it was going on too long for his reply box, but was just the right length for a blog post. Thanks, guy.

What are your favorite events?

Tennis, volleyball. Although I watched a lot of track (dashes and hurdles) and got into them.

What events do you just not get?

I still find synchronized swimming exceedingly funny. I GET it, but there is a move afoot in the competition to get rid of the excessive makeup, which currently makes it seem more like theater and less like athletics, when it clearly is more the latter.

What events would you include or exclude?

Include baseball and/or softball. I’m disinclined to exclude anything, even if I personally don’t care about it.

I don’t grant that. In an Internet world, I found out way too much. Even NBC reported on a couple stories, including Michael Phelps’ record-breaking medal, aware that everyone knew anyway. Lots of people in the US were finding ways to watch it on the BBC.

I think there needs to be tape delays in 2014 (Russia) and 2018 (South Korea) but there should be only enough so that American audiences don’t have to watch the Games at 4 a.m. Eastern. For the 2016 games in Rio, the time zone is only one hour off US Eastern time, and this should allow for more live coverage.

What could NBC be doing better with its coverage?

Obviously, the coverage of the individual sports tend to be all over the place, quality-wise. There are ALWAYS sports announcers who make observation about how much an athlete “wants it,” or otherwise read his or her mind.

Mary Carillo did a series of quite interesting series of stories about the UK, including, of all things, the institution of Greenwich Mean Time.

But the infotainment folks of the TODAY show irritate me. Al and Matt wrestling; new anchor Savannah being a gal pal in the Olympic village; Al playing cricket; anything involving Ryan Seacrest and Jenna Bush. (Read Ken Levine’s satiric take on how Seacrest got his NBC contract.) One Saturday morning, two people were telling us the Facebook or Twitter conversation about the Olympics was heavy in Maryland and Virginia, opining that this was the case because an athlete is from one of those states; I had to shut it off.

Here’s a question for you all: how much of home team fans should the media be? On the TODAY show, US hurdler Lolo Jones tearfully complained about a New York Times article critical of her two days before her finals, where she finished a close fourth.

How weird is it watching Olympics without Jim McKay on the teevee?

I loved Jim McKay. But Bob Costas is fine.

Do professional athletes in sports like basketball make for better, or lesser, competition?

Who is an amateur athlete anymore? Many college basketball players in the US, are 1-and-done, attending college for a year, maybe two, then make themselves eligible for the NBA draft. Track stars get stipends or appearance fees, or something that allows them to travel over the country.

And the pros in tennis start as teenagers. The pool of amateurs would be exceedingly small. Moreover, the Williams sisters, and the Bryan twins seemed to love representing the US, as did many of the other athletes, especially from the smaller nations.

How big a problem IS doping, and what’s the future of the very notion of ‘performance-enhancing’ medicine?

I really felt sorry for that young female swimmer from China who, a number of people suggested, had cheated because of her incredible time, though she was cleared a day later. To the question, there will always be athletes looking to get an edge, and folks who have to keep their ears to the ground to try to stop it.

There’s a bigger problem, though. The weird thing about the Olympics is that the rules are largely determined by the governing body of that particular sports. No sport should be so designed that throwing a match should be advantageous to that team, as was happening in badminton.