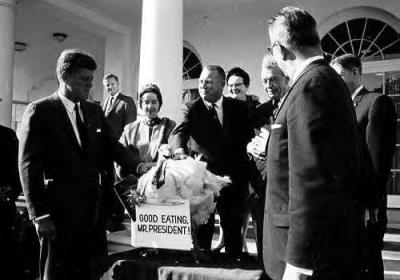 I went out with this woman in the late 1970s who was old enough to have voted for John Kennedy the first time she had the opportunity to vote for President. I can only imagine how devastated she was, along with the rest of the country, when he was killed. Every Thanksgiving I spent with her, when she or someone else said grace, she always added, “And bless the memory of John Fitzgerald Kennedy.”

That thought ran through my mind when I realized that Thanksgiving and the assassination of JFK coincided this year. November 22 in 1963 was a Friday – I’ll undoubtedly write more about THAT event next year, on the 50th anniversary.

Thanksgiving is probably my favorite holiday. Yet I know from personal experience how a holiday can engender sad feelings as well. My Chinese restaurant Thanksgiving, when I was uninvited, out of the blue, by an ex. Or the Christmas Eve in 1990 when our church’s tenor soloist died, and yet we had a service to sing; I’m sure we were not very good.

Still, I think a day set aside for thanks is a good thing. Some people say, “We should be thankful EVERY day,” and that’s true. But, for most of us, we just aren’t.

For those of you celebrating it, may this Thanksgiving be a good one.
***
Yes, I think the pardoning of the turkey is a silly tradition. It doesn’t bother me, though, like it does some indignant folks. Silliness in DC beats incivility.

0 thoughts on “JFK and Thanksgiving Day”