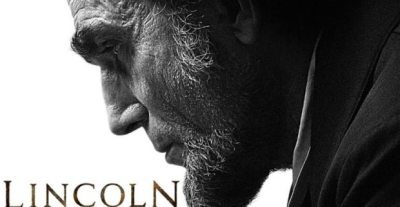 On Black Friday, my wife and I went to the Spectrum Theatre in Albany to see the 1:50 showing of the new Steven Spielberg movie Lincoln. It was sold out! That hasn’t happened to me since the original Star Wars. We bought tickets for the 3:15 show, and were advised to be back by 2:45.

We bought some hot chocolate, then went to a charming little toy store/food emporium. By the time we got back to the theater, there was this long line. I assumed it was to buy tickets; no, the 3:15 was SOLD OUT, and the line was for the ticket holders, which included us, fortunately. Also, the 6:25 showing that night also sold out, we noted as we left.

I was glad to have seen a recent interview with Doris Kearns Goodwin, author of Team of Rivals, the Lincoln book upon which the movie was based. I wasn’t as surprised by the relatively high-pitched voice that Lincoln (the extraordinary Daniel Day-Lewis) had. All that he had lived through, the secession, the war, and the death of a son all wore on him, so that General Grant said that he had aged ten years in the past 12 months. Yet, despite all that, he could be very funny!

I wonder if the 10% of the critics on Rotten Tomatoes who DIDN’T like the movie, thought it was boring, etc. I think they may have had different expectation. It is, above all, a political movie, based in the first four months of 1865. Lincoln has been re-elected President. A number of Democrats in the House of Representatives have been defeated, but are in a lame duck session. Can Lincoln get the 13th Amendment, to abolish slavery, through the House? And how will that affect the chances for peace in that great civil war?

For the most part, it didn’t feel like a Spielberg movie. I can’t explain that exactly, except to note that the second scene in the movie, involving people quoting Lincoln, to Lincoln, did have a Spielberg “feel”.

Great appearance by Sally Field as a haunted Mary Todd Lincoln, a role she noted recently that she had to fight for; Lincoln was older than Mary, who he called Molly, but Day-Lewis is a bit younger than Field. Also, there were stellar roles by David Strathairn as William Seward, Tommy Lee Jones as Thaddeus Stevens, and others. I must admit that the character James Spader played didn’t seem all that different from his role on Boston Legal.

Will this film become the definitive Lincoln biopic? It may very well do so. People cried, and applauded at the end of the film. I liked it a lot.