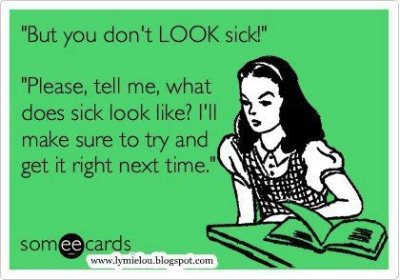 I have a friend who actually is in great pain much of the time. But she doesn’t “look” sick, or injured, and people dismiss her level of discomfort. So this graphic is for her.

Troy, who participates in ABC Wednesday, and has designed the last several logos for the rounds, and his wife Diann, have undergone a terrible family ordeal, which they describe in painful detail. Then Troy explains that injustice runs in the judge’s family.

The Unmitigated Disaster Known As Project ORCA, which was “a massive undertaking – the Republican Party’s newest, unprecedented and most technologically advanced plan to win the 2012 presidential election.”

Letter to a future Republican strategist regarding white people. “My name is Eric Arnold Garland and I am a White Man.”

Paul Rapp believes we’re missing the most important story in the David Petraus case. Also, An interesting letter, which may or may not relate to Petraeus affair; the second letter.

I could list Amy Barlow Liberatore’s Sharp Little Pencil just about every month. Her poem Interview With Sgt. Davis, Kabul, 2012 addresses what we are fighting for, while Bitter Silence is a more personal reflection.

Ken Levine wrote about Social Network Rejection when two or three people unsubscribe from your Twitter page or someone unfriends you on Facebook. I realize that this is a real issue for some people. It just isn’t for me. I did sign up for some thing that tells me when someone has unfriended me. A couple were people discontinuing Facebook altogether , and the other two were friends of friends I didn’t know personally anyway. I suppose I should care, but I just don’t. Of course, I don’t even go on Twitter anymore unless there is a weather emergency or some other urgent item I feel needs to be posted. The only other things I put there are the automatic posts from my blog. See also this piece.

Levine talked with Warren Littlefield, who was the NBC President of Entertainment during the ’90s and was Brandon Tartikoff’s key lieutenant in the ’80s. Part 1; Part 2.

Levine’s lovely story about Shari Lewis, who I AM old enough to remember.

The grandfather of the Planet of the Apes.

Why People Think Christians Are Crazy.

One Shade of Grey.

Chuck Miller: It was a “I thought it would last forever” relationship, and I thought this new prospect would work out. And it did at first. It worked out better than I could have ever imagined, ever in my wildest dreams.

From Y’all To Youse, 8 English Ways to Make “You” Plural, a topic which I touched on almost two years ago. Yinz?

Please move the deer crossing. I had heard this one some time ago, but I thought it was a prank. The woman later admitted she didn’t understand who was being directed by the signs.

First result for YouTube search of scream of frustration.

Debbie Harry explains how to pogo.

From Annette Funicello to Johnny Carson, via Paul Anka.

What if Marilyn Monroe had survived?

Twinkies in the Movies. A couple are NSFW.

Chuck McCann has a joke for you. It’s the one about the guy carrying the crate…

Alan David Doane’s year in review. My only objection is that we’ve still got another month. Unless the Mayans were right.

FROM MY OTHER BLOGS, plus

My life: the plan, and the reality

Three Myths about Copyright Law and Where to Start to Fix It.

Our church choir performed a concert this month. Here are some pictures; I’m in a couple of them.

Statistics | Roger Green and Associates, Inc. – Significance Testing: What Happens If We are Wrong? It is a critical question in risk assessment. A wrong decision has implications, sometimes small and inconsequential, sometimes …

Sera Cahoone knows what it’s like to have Thom Yorke hold your hands and sing to you
By the time she was in middle school, she was playing drums for gigging bands, and in the early ’90s, she formed the experimental-rock band Idle Mind with her friend Roger Green. Although one of the more promising local acts of the time, the pair split …

Dogs that are lifeguards By Roger Green.

Graphics stolen from Facebook, the latter from George Takei.

0 thoughts on “November Rambling: Legacy of fools, and Facebook rejection”