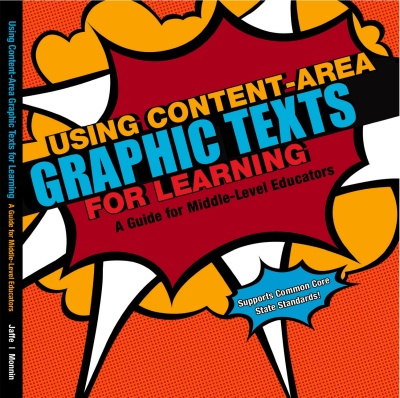 I’m someone who used to sell graphic novels in a comic book store, not a teacher. My wife IS a teacher, though, and was excited to see that I had received a review copy of Using Content-Area Graphic Texts for Learning.

Even Meryl Jaffe, co-author of this book, with Katie Monnin, mentioned in her blog that the title of this book is a bit of a mouthful. Basically, this should be called “Teaching with Graphic Novels.” Regardless of the name, this volume makes a convincing argument for using graphic novels in teaching math, language arts, social students, and science. More importantly, very early on, it makes the case, in the strongest terms, that the graphic novel is a legitimate teaching tool that broadens the educational palette for an increasingly diverse population.

Not that Meryl was always a believer. She used to be a “stay away from those comics and graphic novels” type until her children turned her on to Joe Kelly’s I Kill Giants. Now she attends comic book conventions from New York to San Diego.

In each of the four subject area, the authors take a single book and show how students, labeled as Memory Megan, Attention Andy, Cognitive Coby, Language Larry and Sequencing Sue, can improve in the named areas. Just as important, they list many other graphic novels that might be used, identified by grade level and the skills that will be gleaned.

Basically, if you are an educator that has considered using graphic novels, this book both gives practical steps for teaching and provides cover when dealing with school administrators about using such a “radical” tool.
***
The above is what I wrote in as an Amazon review; I do that so rarely.

I first discovered Meryl Jaffe when she began contributing to the ABC Wednesday meme with which I’ve been involved. Her posts are always entertaining AND informational.

Regarding the graphic novel: I remember when the title was first being bandied about in the 1980s, I hated them, because they seemed like large, squarebound comic books. Indeed, I have this vague memory of a couple X-Men items touted as graphic novels. One was $4.95 and the other $5.95, when a comic book was going for 60 or 75 cents, and even a longer issue would go for under $1.50. It just seemed a greedy attempt to make a silk purse out of a sow’s ear; well, maybe not quite that bad, but totally unnecessary.

The graphic novel has grown tremendously over the past couple decades. I’ve marveled that “funny books” are getting legitimate notice in Entertainment Weekly and other mainstream media, without that “BAM POW” condescension that some newspaper are always eager to use.

You may interested in Rise of the Graphic Novel: everything you need to know about the comics field in 70 pages. Meryl has put together a list of 2012’s Best Non-Fiction or Historical Fiction Graphic Novels.