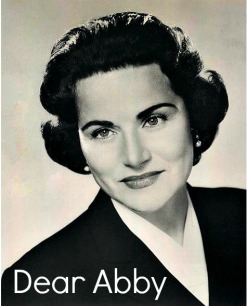 Even as a child in Binghamton, NY, I religious read Ann Landers in the morning paper, the Sun-Bulletin, and Dear Abby in the Evening Press. When the papers merged, both columns appeared.

Someone of a younger vintage might not appreciate the impact of the social significance of these columns written for many years by twin sisters, born July 4, 1918. Ask Ann Landers was originally the pen name created by Chicago Sun-Times columnist Ruth Crowley in 1943, but it was taken over by Eppie Lederer in 1955, and used until her death in 2002, when the name was retired; it was Eppie with whom the pseudonym was most identified.

A few months after Eppie became Ann, Pauline Phillips started the similar Dear Abby; the name Abigail Van Buren came from a Biblical woman and a one-term President. The sisters feuded for years. Pauline’s daughter Jeanne Phillips, took over Dear Abby in 2002, officially, when Pauline’s Alzheimer became known, though in fact Jeanne’s participation went back to her time as a teenager.

I long preferred Ann to Abby. I thought she was more tolerant, especially after her 1975 announcement about the end of her 32-year marriage.

Yet it was Dear Abby, by the structural simplicity of the pen name, which was the better known of the two. “Dear Abby” generated many more references in popular culture, such as this piece by the Bitchy Waiter. My favorite is the song Dear Abby by John Prine [LISTEN].

Pauline Phillips, the original Dear Abby, died on January 16.
***
Conrad Bain died this week. I must note that I wasn’t a big fan of Diff’rent Strokes, which was about this rich white man, who had a young daughter, adopting two black kids. Arnold often said to his brother, “What’chu talkin’ ’bout, Willis?” I think it was supposed to be funny.

I did watch and enjoy Bain on Maude as Dr. Arthur Harmon, her neighbor and Republican foil to her liberal views.

One thought on “Signed, Dear Abby”