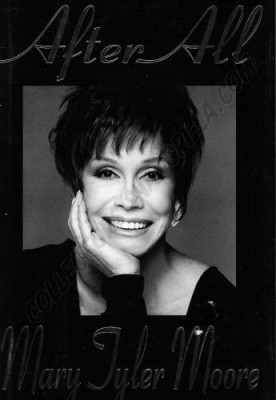 As a television personality, there is probably no one I enjoyed more than Mary Tyler Moore. She appears on my Top Five favorite TV shows of all time, The Dick Van Dyke Show; her eponymous show is on my Top 20 list.

Looking forward to reading her autobiography, I was mystified by the fact that, for much of her professional life, she was a bundle of insecurities. Her success on her own show and Van Dyke’s she attributed to the talented performers, writers and producers around her. Her failures, on other shows and on stage, are her fault. Such insecurity is odd, and not particularly appealing.

There is a certain arm’s length in her retelling of her growing up with a distant father and alcoholic mother, told in short chapters. A neighbor briefly molests her when she was six, and her mother refused to believe her; it’s told, as much of the book is, in this matter-of-fact manner. Later, the death of her younger sister and her son are likewise relayed.

Interestingly, her second marriage, to television producer Grant Tinker, who ran her production company, MTM, seemed to epitomize the emotional distance both of them operated on when things were less than optimal, though they appeared fine when things went well.

The book became so frustrating that, halfway through reading it, I actually blogged about it. Chris Honeywell nailed it: tanha, “a Buddhist idea which seems to correspond to ‘cravings, lusts, and focusing on self without introspection.'”

Then I started having second thoughts. I spoke to a friend of mine who has gone through therapy. The therapist has said to my friend, “Why aren’t you screaming” about the painful events being shared? Maybe when one has experienced enough emotional venting, one may come off as cavalier about the tough issues.

The most interesting chapter, and, at 12 pages, one of the longest, is when Mary finally gets sober. She went to the Betty Ford Clinic, and was incensed by the tough treatment. “Then leave,” one nurse said.

After All, by the end, was a rather honest book. Not always pleasant, not what we might have expected from “our Mair,” but thorough.
***
Mary Tyler Moore nearly skipped the audition for “The Dick Van Dyke Show”.

Dick Van Dyke: “I’d go to work with terrible hangovers. Which if you’re dancing is hard.”