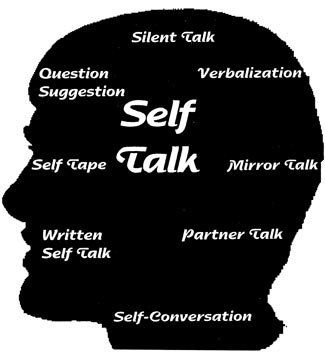 Chris Honeycutt – wish you were still blogging, Chris – wrote to me, “Totally thought of you on this“:

“Your lips aren’t moving, you’re not making any sound that other people can hear. But are you making ‘sound’ in your head?”

“Many people who read silently do so by imagining a voice speaking the words they are reading (and often, it’s your own voice, so there’s even a specific ‘tone’. I wonder if this is what makes people react so strongly to some blog posts).”

Interesting. I usually DO read, hearing my own voice. It’s especially true when I write this blog; I try to have it sound like me talking to you; sometimes I read back what I’ve written and I’ve totally nailed it; other times, not so much. Hey. what do you want from a free daily blog?

“This could be because when we learn to read, we associate symbols with verbal sounds until the association is effortless.”

It’s comforting to know that I’m not the only one who loves the sound of his own voice, especially when I’m reading back my own words.

Chris thought the funniest line was: “The authors also comment that few would contest that most of our waking time is spent talking to ourselves covertly.”

Covertly? The Wife will tell you that when I’m composing a blog post, my talking to myself is QUITE evident. It’s especially true when I have an idea for a piece but lack either pen and paper or a word processor. 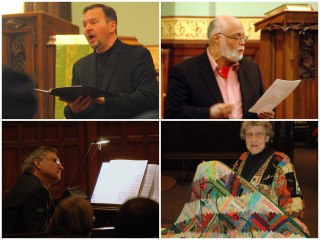 I was thinking of this because I read some Langston Hughes poems last week at First Friday in Albany. Someone asked if I had practiced reading them at home. No, all my practice was “in my head,” often on the bus. The ones marked # I read. The others were sung by baritone Christopher L. Trombley, accompanied by Todd Sisley on piano. (Pictured, clockwise from top left: Chris; Roger; Gloria Wood, who was displaying quilted wall hangings; and Todd.)

Second photo by Ray Hendrickson, stolen from his Facebook page.

5 thoughts on “Talking with myself”