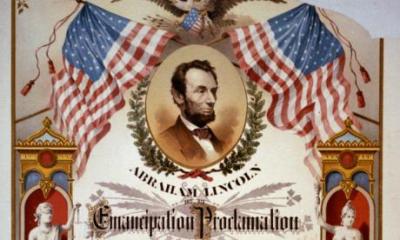 There was an exhibition, entitled The First Step to Freedom: Abraham Lincoln’s Preliminary Emancipation Proclamation that toured eight cities in New York State in the fall of 2012, the last of which was Albany, on November 9 and 10, at the New York State Museum. My family spent over 90 minutes in line to see the document for less than three minutes.

As this audio/visual presentation shows, the Emancipation Proclamation has been oversimplified.

It is NOT true, for instance, that President Lincoln freed all slaves with the stroke of a pen.

“It is an easy narrative, historians argue, that a single document granted freedom. But that’s not how it happened.

“Look to the proclamation’s language: ‘That on the first day of January, in the year of our Lord one thousand eight hundred and sixty-three, all persons held as slaves within any State or designated part of a State, the people whereof shall then be in rebellion against the United States, shall be then, thenceforward, and forever free; and the Executive Government of the United States, including the military and naval authority thereof, will recognize and maintain the freedom of such persons, and will do no act or acts to repress such persons, or any of them, in any efforts they may make for their actual freedom.’

“Freedom only applied to those slaves in states that had seceded. It did not apply to border states, or specific regions in Union control: about 750,000 slaves.”

On the other hand, it would also be false to suggest that it did nothing. It led to a number of black soldiers fighting on the Union side; after about two years of war, that infusion of new fighters made a huge difference, and also showed that it wasn’t just others fighting for the freedom of black people.

The Emancipation Proclamation was just part of a process, sometimes progressing (Thirteenth Amendment, Reconstruction), sometimes regressing (Ku Klux Klan, Jim Crow laws, inequitable treatment by courts). The military became integrated, and the schools were supposed to be, although the resegregation of public education is now painfully clear. There is an inequality in our prison system, and continued inequity in wealth is its own jail.

Freedom is a process, not an event.

7 thoughts on “The First Step to Freedom”