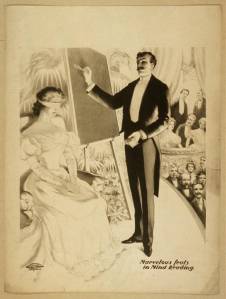 Chris from Off the Shore of Orion starts off the Ask Roger Anything jamboree with:

Which one would you pick, why, and what would you use it for?

I decided to deconstruct this. How often have I said, “Boy, do I wish I were stronger so I can do X?” Not that often, in the grander scheme of things. Maybe during my many moves, but many hands make light work. Besides, I’d probably end up schlepping stuff for others far too often

I’ve wanted to fly since I was a child, had the flying dreams and everything. It would save time, and time is a finite, not a fungible, commodity. Thought that would be it.

However, the idea of the ability to read minds was too intriguing to pass up. How often have I wondered, “What did he REALLY mean when he said that?” or “What does she REALLY want?” I can imagine trying to finally broker a peace in the Middle East by knowing what the REAL bottom line is on each side! It would also come in handy when dealing with my daughter, who is not always as forthcoming about her feelings as she might be.

Then I wondered about how obtrusive it would be, to hear everyone’s thoughts, to hear the truth behind all of those white lies. Would I be able to turn OFF the noise of everyone’s mundane or petty thoughts? It’d be kind of spooky – violation of privacy and all that.

So I believe I would fly.

What would I do with the ability? Depends on the particulars: how fast could I go? If it’s hovercraft speed, then it’d just be a time saver. If I could go fast enough, I’d be inclined to visit my sisters in California and North Carolina, maybe travel to places around the world I have never seen. Hey, do I have temperature-resistant garb, or in the alternative, will the wind chill not affect me? THAT would DEFINITELY be a factor!
***
Tom the Mayor, who I know from the Albany YMCA and FantaCo wondered: Have you ever had a talk with Lydia about racism? It is a tough subject for a parent to talk with their children about.
To which Lisa from peripheral perceptions added: I think your answer to Thomas’ question would be very interesting. Count me in on that one.

I don’t think you have a talk with kids about racism, any more than you would have a talk about sex. You look for opportunities to point out situations where racism exists, even today – shocking, I know, but they do present themselves – and discuss what might be the motivating factors.

Now, my daughter has developed a pretty good sense about HISTORICAL racism. She came home from school one day and asked if she would have been a slave; I had to articulate that not all black people in the US were slaves and that different states had different laws. She’s amazingly well versed in the Negro Leagues of baseball.

In some ways, racism these days is harder to explain compared with what it used to be like. Colored-only water fountains and the back of the bus are simpler to describe than banks redlining districts so no blacks can move into a given community, or Driving While Black.

Sidebar: we have been fortunate that she has gotten to go to preschool and elementary school with a wide range of types of people.
***
Scott, who seems to have unfortunately given up blogging for the nonce, asks a time-sensitive question:

(As always ask in the spring) Who do you think will win the World Series this year, and who will they beat?

In the AL West, the whatever-the-geography-is Angels over the Oakland As. In the AL Central, Detroit going away, though KC could be a distant second. In the AL East, Toronto over Baltimore. In the NL West, the LA Dodgers over SF Giants. In the NL Central Cincinnati Reds over the St. Louis Cardinals. In the NL East, the Braves will come in second.

What, you say Montreal moved? Several seasons ago? OK, Toronto over the FORMER Expos, the Washington Nationals.
***
My buddy Charles O wrote on Facebook: If time flies like the wind, do fruit flys like the fruit?

My annoying friend Broome, who I’ve known personally for over 30 years, wrote on Facebook: “You DO realize what a dangerous position you have just placed yourself, don’t you? Hmmm let me think……. “.

To which I wrote something about getting out of my comfort zone.

Then a short time later: “When did you stop beating your wife?”

Have more questions to answer, including for Scott. Still taking questions, too, and answering them, as well; but note: GIGO.