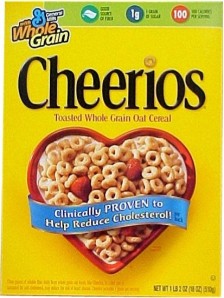 My fascination over a cereal ad – no, actually, THE Cheerios ad featuring an interracial couple and their child – is that all the hate it has engendered doesn’t surprise me at all. The argument from opponents – besides the scatological responses so bad that General Mills had shut off the comments on the YouTube video – is that “they are throwing” miscegenation “in our faces”, whereas the cereal producer’s claim is that they’re showing the diversity of the population. There has been a clear uptick in the number of mixed race marriages in the US this century.

Of course, you KNOW what the real problem is for some people with that ad? It suggests that black people and white people were – hold onto your hats – having SEX! When you first see the ad, one could assume that the girl might be adopted, but seeing the dad pretty much eliminates that option. The long-standing taboo about interracial sex in the United States is still very strong, from white male slave masters and black female slaves, to the young black Emmett Till getting killed for looking at a white woman too long.

This reminds me of situation about 35 years when my girlfriend at the time, who was white, went apartment hunting for us, and she found a nice place. But the surprised look on the landlord’s face when I showed up to sign the lease was priceless. Rather like the look on the faces of Katharine Hepburn and Spencer Tracy when Katharine Houghton brought home Sidney Poitier in the movie Guess Who’s Coming for Dinner.

About 25 years ago, I was having some general philosophical conversation about marriage with this secretary in an office in which I was working as an intern. Very nice woman, and particularly to me. But she was adamantly against mixed-race marriage. “What about the children?” she proclaimed. They’ll never fit in, they’ll be scorned by both blacks and whites, and be outcasts in society.

Obviously, I have a vested interest in trying to make sure the Daughter lives in a better world than that. Her preschool was ethnically diverse; her elementary school is somewhat less so, but we hope for the best. Our church is predominantly white, but with an increased diversity, including, most recently, an influx of Asian Indians.

You just keep trying to make a decent world for your child, which is pretty much irrespective of race.

BTW, Chuck Miller knows the woman in the Cheerios ad.
***
Of course, I remember Jean Stapleton in All in the Family, who died recently. THE most disturbing episode of that series is referenced here.

9 thoughts on “TV: controversy over a Cheerios ad?”