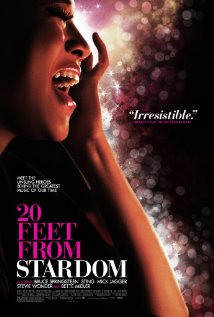 It pretty much starts off with Lou Reed’s “Walk on the Wild Side”: “And the colored girls go do doo doo, do doo …”. The movie 20 Feet From Stardom is an exceptional documentary about the generally ignored, unknown, but tremendous backup singers, often black women, who perform on some the biggest hit songs and albums of all time.

Meet Darlene Love, Lisa Fischer, Merry Clayton, Tata Vega, Claudia Lennear, and Judith Hill, most of whom are or were figuring out whether they had the egos necessary to be solo artists, or whether the craft they engaged in, making the star performer look good, was good enough. Love, who was thwarted commercially by producer Phil Spector more than once, was cleaning houses when she heard one of her own songs on the radio and had to come back as a singer. Listening to Clayton’s voice on the Rolling Stones’ Gimme Shelter, bare without the instrumentation, is chilling.

There is some insight from folks such as Bruce Springsteen, Sting, Stevie Wonder, Mick Jagger, and music producer Lou Adler, among others. We also hear wisdom from former Raelette (background singer for Ray Charles) Mabel John, who has a second career. The film touches briefly on some of the folks who were background vocalists and became stars, such as Luther Vandross.

A couple highlights for me: the segment on Clayton’s role in Lynyrd Skynyrd’s “Sweet Home Alabama”, especially juxtaposed with her cover of Neil Young’s “Southern Man,” the latter of which is on the soundtrack album for the film. Also on there is Love’s cover of Bill Withers, appropriately with three of the background singers we had already seen in the movie.

How shall I put this? If you have enjoyed the popular music of the past six decades, see 20 Feet from Stardom, if you can. There were only a dozen people at the Spectrum in Albany when my wife and I saw it Thursday night. Certainly catch it on video, because it’s quite likely NOT playing at a theater near you.