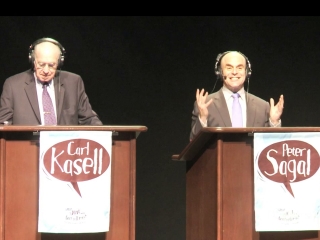 Some months ago, The Wife contributed to our local public radio station WAMC, for which she got two tickets to watch the taping of the National Public Radio program Wait Wait…Don’t Tell Me!, a weekly hour-long quiz program where “you can test your knowledge against some of the best and brightest in the news and entertainment world while figuring out what’s real news and what’s made up.”

While the Daughter stayed with friends, we went to western Massachusetts, dropped off our stuff at a motel, then on to Tanglewood. This is the lovely music venue that’s been the summer home of the Boston Symphony Orchestra for decades, the site of a couple music schools, and is a beautiful venue for classical music, jazz, performers such as James Taylor, and John Williams and the Boston Pops.

It had been a long time since I had gone to Tanglewood, almost exactly 15 years ago when I saw Tony Bennett and Diana Krall. The Wife had gone three or four years ago to a couple concerts.

With all the inflexible rules about concert going at other venues, we were surprised to discover that they actually encourage people to bring in lawn chairs, picnic baskets, blankets and the like.

From the lawn, heck, even from some seats iside the Shed, you can’t see the stage. The screens help – a LOT.

The show begins. They record about 90 minutes of material for a 60 minute broadcast. The announcer/scorekeeper is a “voice of God” type, Carl Kasell, who is pushing 80. Someone in the audience said she was probably the only 25 year old with a crush on Kasell’s voice; almost certainly NOT true.

The host is Peter Sagal. In one segment that did not make it on the air, he admitted that he used to twirl around his wedding ring, which his wife at the time HATED. So she bought him another ring to play with, and now that he’s divorced, he still does. He also defined a collective: a “smug of NPR listeners,” which cracked up the audience.

The show does a couple of its set pieces. It’s fascinating that the amount of time the phone contestants are on the line is at least triple what ends up on air, with some quips by the panel and Sagal interrupting the process.

Lots of guessing around us before the show who the guest might be. Would it be James Taylor, or perhaps Yo-Yo Ma? It turned out to be classical pianist Emmanuel Ax. He must have talked for nearly 25 minutes, only 10 of which made it onto the air. His discomfort with the idea of musical competition made it on the air, but the specific answer to Amy’s question about wishing his competiton to do poorly – no, he doesn’t – was left off.

So was a lot of information about him growing up in Winnipeg, Canada for two years, and his total inability to improvise musically. But mostly, what one missed on the radio was his utter humility, expressed well in his face, and his laugh.

There were a couple jokes about WAMC chair Alan Chartock that might have been too “inside baseball” to air.

When the show was over, Peter did about four minutes of lines he needed to do over for the broadcast, then there was a lively Q&A. We didn’t rush to the car; we weren’t going anywhere soon – and getting out took at least a half hour – but so it goes at Tanglewood.

Listening to the show on Saturday morning, I couldn’t help but feel a little disappointed. It was good and entertaining, but the live show was a whole lot more fun. If you get a chance to watch a taping, I’d recommend it, but it might take a little lustre off the show one can hear each week.

3 thoughts on “Wait Wait…Don't Tell Me! at Tanglewood, August 29”