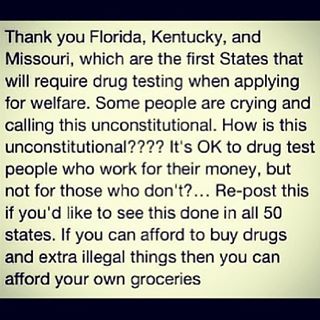 I saw this message about drug testing welfare recipients on Facebook. It irritated me, and I wrote: “This is an amazing waste of money. 1) Most jobs DON’T require it. 2) In places, such as Florida, it’s cost more to do the testing than the savings gained by denying benefits.

The only reason I’m even bothering to bring this up here – besides as a response to my low blogging output of late – is that the person who posted was a friend, not a Facebook “friend”, but a real-life friend. I had thought to dispute the post via Instant Messaging, but once the post started getting LIKEs, it seemed that I needed to answer via the same medium. (Rather like how I feel a front-page newspaper error should be corrected in the same location.)

The only other “correction of the Internet” I tend to do publicly – as opposed to private fixes of typos – involves finding some myth that has easily corrected via Snopes. So I was mildly disappointed to discover that sometimes Snopes is not the authoritative source either. “They concocted a section called ‘The Repository of Lost Legends’ (‘TROLL’), consisting of nine stories made up by the Snopes duo, five of which they flagged as ‘True.’ Here is the ‘pear flag’ story, and there is also one about how Mississippi removed fractions and decimals from the school curriculum, and three other stories which are just believable enough – but are fake.” They do warn against false authority, even themselves.

8 thoughts on “False welfare reform; and other phony info”