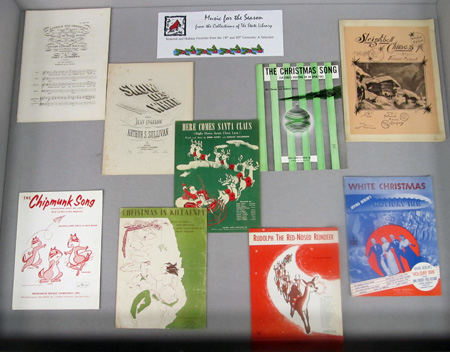 A couple years ago, a very good friend of mine, someone who has known me for decades, said I was an iconoclast. I suppose that’s true; other people have said over the years that I march to the beat of a different drummer.

Most people listen to “Christmas music” between Thanksgiving (or earlier) and Christmas. Not another note after that, because the tree has already been literally thrown to the curb. I put “Christmas music” in quotes because so much of it has nothing to do with Christmas. Certainly all the secular songs about Santa and reindeer are about Christmas. And some of the religious stuff, though, since we are in Advent, not Christmastime, you may not have noticed here are more about the baby having been born than anticipation of the event.

(One of my favorite podcasters mused whether River by Joni Mitchell is a Christmas song. I say: absolutely. It speaks of cutting down trees, and reindeer; it may express ANXIETY over the holiday – they’ve made whole movies about THAT – but it’s no less applicable.)

Then there are those songs that just have to do with cold weather. Now these have NOTHING to do with Christmas whatsoever: Jingle Bells, upon which River is based; Jingle Bell Rock; Frosty the Snowman; Winter Wonderland; and especially Baby, It’s Cold Outside. But try playing Sleigh Ride or Let It Snow in early February; people would think you are crazy.

I tolerate listening to the music starting on November 22, which is the earliest date Thanksgiving can occur – it was on November 28 this year, the latest it can take place. But I don’t start playing tunes until December 6, recognizing some European tradition, and don’t stop until January 6, at the end of the 12 days of Christmas. Hope that doesn’t weird you out.
***
The American Family Association’s Naughty Or Nice List And The Vapidity Of The ‘War On Christmas’

5 thoughts on “My iconoclastic Christmas”