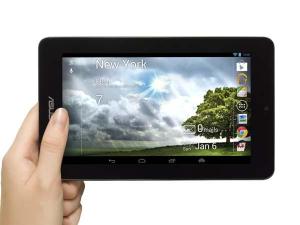 “Do you want the use of an Android device?” our techie supervisor asked me a couple months ago Sure, yeah, I guess so. There it was – an ASUS Android 7. First thing: plug it in, which I do. I can’t get it started, but that is a function of not squeezing these two prongs long enough. So it’s working. What should I DO with it?

I know; I’ll download – what do you call them? – applications? They say apps, I understand. But there are about a billion of them, many of them free; which ones should I get? I go to Google Play, which is already on the device, and type in various obvious ones: CNN, the local weather, the local mass transit, FEMA (hey, ya never know), a dictionary, and Free Cell card game. What’s cool is that I can search for apps on my computer and they magically would appear on the device; no plugs necessary.

Hey, it’s locked! How do I unlock it? I keep pressing the lock, when I should have been making a sweeping motion to the left and down, or right and down.

Here’s what it’s useful for: checking my e-mail while working with my daughter on her homework. It doesn’t require 100% attention. I watched a little bit of football, and checking e-mail with that is a good thing. But not so much watching a dramatic series, or JEOPARDY! or any program which I have to view actively.

I discovered where the Internet hot spots are in the area: certain businesses, the 905 bus from Albany to Schenectady. AlbanyNet works some places downtown.

I know I’m not maximizing the device’s utility, possibly because, since it actually doesn’t belong to me, I don’t want to become dependent on it. But I AM glad for the chance to figure out, if only a little, why people’s faces are always buried in some device.

It won’t be me always on the machine, because writing on it is too much work; I obviously just don’t have the thumbs for it, and I type with one finger, which is exhausting. I commented on a dozen blogs, and my neck hurt.

But there is one thing I do like, and that’s the ability to speak to the device and search for websites. Usually its one I’ve already been to, but still useful. And making pages bigger – now THAT’S quite user-friendly. I went to the Zillow app and found all the houses in my neighborhood for sale; not that I was in the market, but it was nice to check out, and expanding the page made the listings MUCH easier to see.

One last thing: it’s so big I’m mot likely to use it.

9 thoughts on “The Android and me”