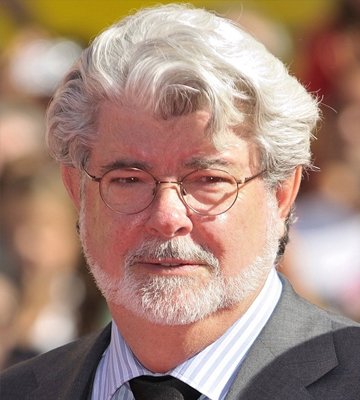 I’ve only seen a relative handful of films created by George Lucas. Most I enjoyed greatly, though, and so I need to note him turning 70.

1973 – American Graffiti (Director, Writer) – great film that not only launched a lot of careers (Harrison Ford, e.g.), but gave new life to others (Ron Howard, who would star in the period TV show Happy Days). And a neat soundtrack too.
1977 -Star Wars Episode IV: A New Hope (D, W, Executive Producer) – yeah, the later films might be better. But I remember standing line at the FOX Theater in Colonie, NY, weeks after it had been released, and coming out saying the wait was totally worth it.
1980 – Star Wars Episode V: The Empire Strikes Back (W, EP) – except for the original, I’ve never seen a Star Wars film a second time. Probably should rectify this.
1981 – Raiders of the Lost Ark (W, EP) – this was so much fun. BTW, never saw the second film; I think the buzz about that scene that essentially created the the PG-13 rating dissuaded me.
1983 – Star Wars Episode VI: Return of the Jedi (W, EP). A suitable ending. No, the Ewoks didn’t bother me.
1986 – Howard the Duck (EP). FantaCo, the comic book store I worked at, sponsored the premiere in town. Who knew it’d be such a commercial and critical bomb?
1989 – Indiana Jones and the Last Crusade (W, EP) – I have great affection for this film: its theology, and the relationship between father (Sean Connery) and son.
1999 -Star Wars Episode I: The Phantom Menace (D, W, EP) – Did not like it. It wasn’t just that one annoying character. I got BORED by this film. It felt too talky, to me.

So that’s it. Never saw any other iteration of Star Wars, so when Jaquandor wants to fix the prequels, generally I have no idea what he’s talking about. This void, now that I think of it, has its upside. I don’t have pay attention to the nasty fanboy hate sessions that Lucasfilm experiences all the time. Here’s Every Star Wars Fan Complaint About Episodes I through III In A Music Video Parody.

George Lucas has sold Lucasfilm to Disney and now is an advocate for more creative education. He has three grown children, plus a young daughter, born in 2013, shortly after his marriage to financial guru Mellody Hobson.