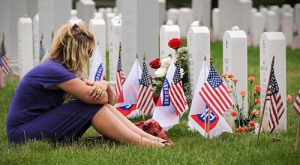 Almost a year ago, Demeur sent me an article about the history of Memorial Day.

[Historian David] Blight’s award-winning Race and Reunion: The Civil War in American Memory (2001) explained how three “overall visions of Civil War memory collided” in the decades after the war.

The first was the emancipationist vision, embodied in African Americans’ remembrances and the politics of Radical Reconstruction, in which the Civil War was understood principally as a war for the destruction of slavery and the liberation of African Americans to achieve full citizenship.

The second was the reconciliationist vision, ostensibly less political, which focused on honoring the dead on both sides, respecting their sacrifice, and the reunion of the country.

The third was the white supremacist vision, which was either openly pro-Confederate or at least despising of Reconstruction as “Black rule” in the South.

Over the late 1800s and the early 1900s, in the context of Jim Crow and the complete subordination of Black political participation, the second and third visions largely combined. The emancipationist version of the Civil War, and the heroic participation of African Americans in their own liberation, was erased from popular culture, the history books and official commemoration.

Interesting. Not surprising, but interesting to read about revisionist history.
***
Last year, when I bewailed what I consider the theological justification for war as anti-Christian, anti-Jesus, an utterly false glorification of war, Chris Honeycutt noted:

I’d say that Memorial Day is 100% a holiday in the real Christian spirit, just like Jesus would want.
Other people make it about celebrating the wars. But it’s really about remembering the soldiers who died.
Everyone who served lost people and had no time to stop and grieve. The war kept coming.
Jesus taught us to give comfort to people with dying loved ones. He also gave comfort to the Centurion (Matthew 8).
So… yeah. Jesus was pretty clear about the war issue. Still think he’d think Memorial Day was a great idea.

I think she might very well be right. Jesus cared for those whose hearts were heavy laden.

So let us remember our lost ones, even as we redouble our efforts for peace.

Do you know who does really nice Memorial Day posts? Jaquandor. Here’s his post from last year. And here’s a post he did during last Advent which feels applicable today.
***
The Gun Jumpers.