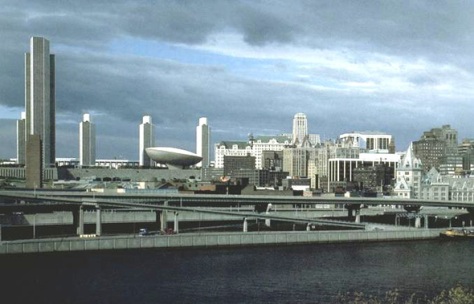 This is less an essay, and more a series of links to bits about Albany, New York’s past and present.

I just realized, though, that I’ve now lived in Albany, capital of the Empire State, for 35 years now. At least thirteen addresses, staying at the current one for the past 14 years.

The area’s airport has a great set of letters, ALB.

You know how newspeople identify a state or country by its capital? “Moscow is thinking… Washington reacts…” People say that about our historically inept – though a little more ept in recent years – state government. “What’s wrong with Albany?” They MEAN the state; guess that’s the curse of living in the capital city.

Not that Albany itself doesn’t have its quirks. The current mayor is Kathy Sheehan, the city’s first woman mayor in its over 325-year history. The guy before her served 20 years; two guys before him, 41.
***
Here’s a 17-minute video about the creation of the Empire State Plaza in Albany, a controversial project which meant dozens of houses and other buildings being razed. Then-governor Nelson Rockefeller, as the joke goes, developed an edifice complex.

This story puts the locally-familiar anecdote about the ESP in a somewhat different light:

It concerns a diplomatic visit to Albany from Queen Beatrix of the Netherlands, during Rockefeller’s first year in office, and the new Governor’s embarrassment and chagrin when she rode in his limo through the “Pastures”, and witnessed the seediness of the neighborhood around the Mansion– this was the moment, it is alleged, that Rockefeller resolved to build something monumental, fitting the grandeur of his administration, so that foreign dignitaries could pay calls without having to see the slime and grime of a typical Northeastern city. The story may contain a grain of truth–and the visit was certainly real–but it also seems clear that Rockefeller even before his swearing-in, had begun… to think about fixing up the deteriorating neighborhood where he’d be spending the next few years

Andy Arthur ponders what would have happened to downtown If Not For the Empire Plaza.
***
Former news reporter Ken Screven remembers Michael the Archangel, a legendary Albany street person of about four decades, until he died in 2002. Someone made an eight-minute film about him.

I’d see Michael, dubbed the Archangel by a local judge, on Lark Street often, especially in Trinity United Methodist Church in the 1990s. My girlfriend at the time (now The Wife) was a tad afraid of him, and understandably so, but I usually got along with him. When I saw him with a legitimate job at the flower shop in the aforementioned Empire State Plaza, I was floored. But the gig, to no one’s surprise, didn’t last long.
***
There will likely be a casino in the area – for me personally, a big yuck – but Albany’s Exit 23 is now out of the running. Dan thinks that’s a good thing.
***
Crossing the street in Albany is difficult. Fundamentally true.
***
Albany, in an alternate future. A comprehensive plan for redeveloping the city of Albany — as proposed in 1963. As Albany Archives commented: “A convention center on Elk St, housing at Jennings Landing, ‘The Washington Park Arterial’… it’s so scary! Here’s the takeaway quote: ‘By 1980, central area of Albany, like cities all over the United States, will be almost completely rebuilt.'”
***
Amy Biancolli feels a lullaby.
***
When Sir Mix-a-Lot rapped “Baby Got Back” with the Seattle Symphony, David Alan Miller, conductor of the Albany Symphony Orchestra, was in the house.