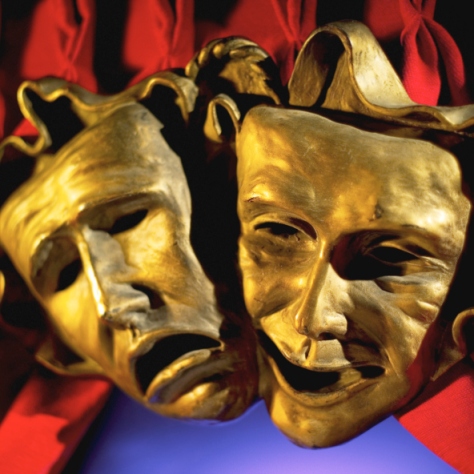 It’s peculiar that I hardly ever write about plays and musicals, given the fact that I go to them quite often, at various venues.

One great location is Proctors Theatre in Schenectady, pretty much the next city over from Albany, in the once a rundown vaudeville house that’s now a refurbished gem. Shows that had been on Broadway and are now touring show up here. It holds about 2700 patrons.

The Wife and I saw at least two shows in the 2010-11 season:
February 2011: Lion King. Astonishing, starting with the entrances from throughout the theater
May 2011: Hair. The story doesn’t age well, but it was still fun, with a lot of talented vocalists.

2011-2012:
Mar 2012: Jersey Boys. The story of The Four Seasons gave me a lot more respect for the singing group. Well done.
April 2012: Memphis. Apr 12 This is why I watch the Tonys; I wouldn’t have known what this award-winning show about music and race was about had I not seen it on the awards show. Good stuff.

As a result of these, we decided to get 2012-2013 season tickets:
October 2012: Mary Poppins. The one show we took The Daughter to, it was colourful and charming. We saw this only a few months after we saw the movie, the Daughter and I for the first time.
November 2012: Wicked. As good as was promised, and much more interesting than the book. The one musical I did review.
January 2013: Million Dollar Quartet. Heavily fictionalized story of a recording session with Presley, Cash, Lewis and Perkins. It was pretty good, but the performances at the end were great. There’s a chat with some of the actors after some Thursday afternoon performances, and these guys were particularly charming.
February 2013: Priscilla. Very entertaining, occasionally provocative show I enjoyed. No, I never saw the movie.
May 2013: Les Miserables. I had never seen a theatrical production. The movie I found to be tiresome. This production, though, I found wonderfully compeling, with some great singing, and touching acting performances.
An extra show we saw that season-
June 2013: Billy Elliot. While it took some wide swings between comedy and pathos, I did enjoy it quite a bit, and it was ultimately effective storytelling.

After watching the previews of the 2013-2014 season back in March, which included a singer from Sister Act, we signed up again. I was sold not just by the fact that Book of Mormon was on the roster, but by seeing the War Horse horse, live on stage. You can see the three people controlling the large puppet, yet you buy into the horse’s actions. The neighing comes from them making three different pitches.
September 2013: Ghost. This was the first Proctors show that I thought was an outright disappointment. It was as though they still needed to work out the pacing bugs. Worse, I never really believed the romance of the two main characters. But the woman playing the Whoopi Goldberg role was great. I liked, didn’t love the movie. Here’s the Broadway World website.
October 2013: Matthew Bourne’s Sleeping Beauty. Was it dance? Was it theater? Good chunks of the story made no sense to me. It LOOKED great, but left me cold. The Wife liked it more than I. Here’s the Nippertown review.
January 2014: War Horse. This is an extraordinary event, this horse who is thrown into war, and his owner who fights to find him. Quite intense sat times. There may have been something in my eye at the end.
February 2014: Sister Act. I had very low expectations of this, another Whoopi Goldberg movie made into a musical. But it was GOOD! Entertaining, funny. Arguably better than the movie.
March 2014: Book of Mormon. I did not see. I was in the hospital with The Daughter. The Wife went – I told her if she had to stay all night at the hospital, I’d stay all day. She thought BOM was too raunchy for her taste.
May 2014: Phantom of the Opera. This was a new production, but since it was a totally unknown commodity, it didn’t matter. While we liked it quite a bit, we were both confused by a few things that maybe would have made more sense to a veteran of the musical.

Another great venue is the Mac-Haydn Theatre, about 45 minutes away from Albany in Chatham, NY. It’s a 350-seat theater in the round, the stage is not huge, yet they use it and the various entrances and exits so well.

In June 2011, we saw The King and I, and the aforementioned Annie, and they were quite fine. This year, in June, we saw The Music Man, and Fiddler on the Roof. The former was quite good, but the latter, incredible. I can’t believe the number of people traveling on the stage without bumping into each other or falling off. This is my second-favorite musical, and it was a very worthy production. BTW, lyricist Sheldon Harnick, who just turned 90, tells his story.

There have been plays in Washington Park in Albany for over a quarter century, with the Park Playhouse, and I’ve seen 80% of them. The last two productions I recall seeing were West Side Story, my favorite musical, which I pretty much hated, especially the intermission huckstering; and Caberet, which was considerably better.

Steamer 10 is a little community theater within walking distance of our house. It has a mixed fare of serious plays and things such as Robin Hood and the Good (& Bad) Fairies of Nottingham, which we took in back in March. But they’ve branched out; their production of Romeo & Juliet, outside near Lincoln Park, was quite fine, despite the incredible wind the day we saw it. Fortunately, my man Dan reviewed it.

For several different periods, but not in the past five years, I went to Capital Rep, an Equity theater. I know I saw these, and I may have forgotten one or three:
Dreaming Emmet by Toni Morrison (premiere)
The Search for Signs of Intelligent Life in the Universe by Jane Wagner
Glengarry Glen Ross by David Mamet
Fences by August Wilson
Halley’s Comet by John Amos
A Tuna Christmas by Williams, Sears & Howard
The Grapes of Wrath by John Steinbeck, adapted by Frank Galati – a particularly clever staging
Dancing at Lughnasa by Brian Friel
The Importance of Being Earnest by Oscar Wilde
To Kill a Mockingbird by Harper Lee (adapted by Christopher Sergel) – still powerful
Always…Patsy Cline by Ted Swindley
Over the Tavern by Tom Dudzick
Our Town by Thornton Wilder
Pretty Fire by Charlayne Woodard
Forever Plaid by Stuart Ross
Charles Dickens’ A Christmas Carol adapted by Maggie Mancinelli-Cahill
Picasso at the Lapin Agile by Steve Martin
I Love You, You’re Perfect, Now Change by Joe DiPietro and Jimmy Roberts
Menopause The Musical! by Jeanie Linders
Jacques Brel is Alive & Well & Living in Paris Words & Music by Jacques Brel, Conception, English Lyrics and Additional material by Eric Blau & Mort Shuman

One thought on “The Theater!”